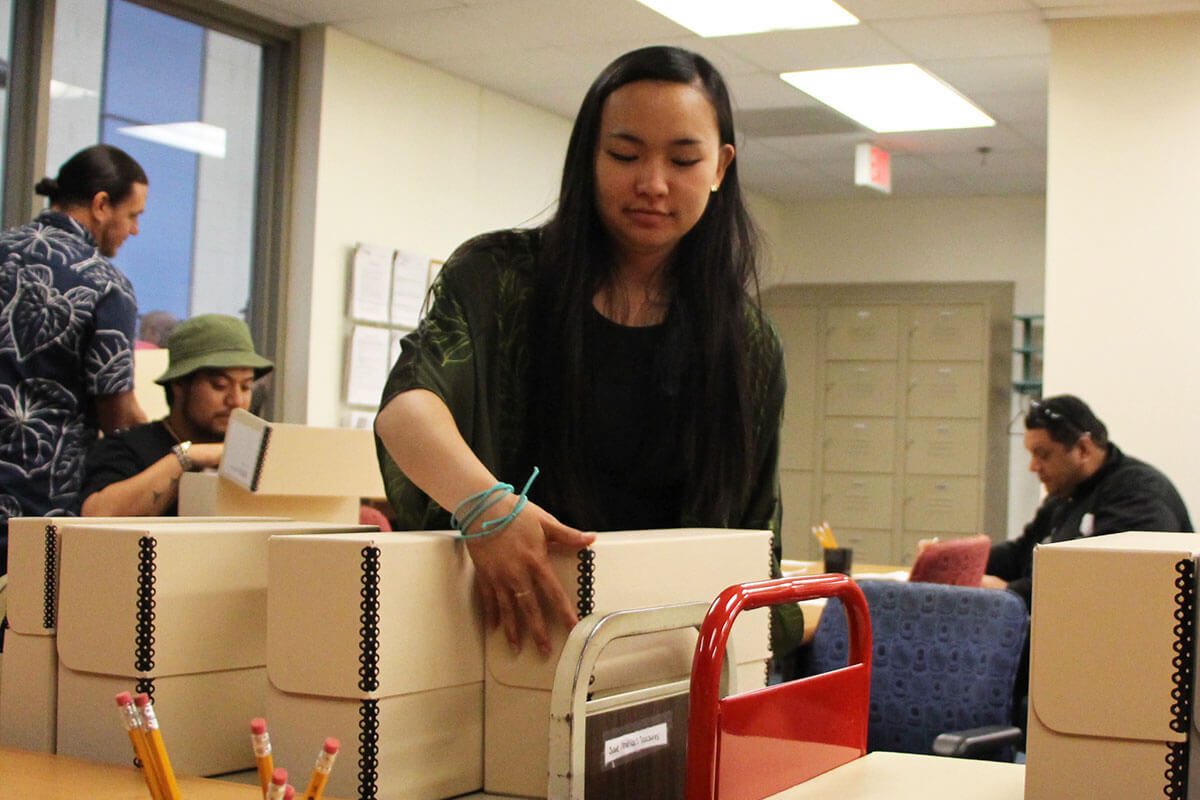 American studies and history major Shannon Hennessey interned as a curatorial research assistant at the Smithsonian Asian Pacific American Center in Washington, D.C. She was one of many Arts and Letters students last summer who received Center for Career Development grants that enabled them to afford living expenses when accepting unpaid or low-paying internships. Applications for 2019 summer internship funding are due April 2 or April 29.

From the U.S. House of Representatives in Washington, D.C., to FX Networks in Los Angeles, Notre Dame students gain valuable experience every year through summer internships.

While internships are an important opportunity to discern career paths or gain insights into fields of study, costs can deter many students from accepting them. To eliminate this barrier, the Center for Career Development offers grants that enable students to afford living expenses when accepting unpaid or low-paying internships all over the world. (Applications for 2019 summer internship funding are due April 2 or April 29.)

“If I didn’t get the grant, I’m not sure I would have been able to go, because my internship was unpaid,” senior Anna Rohrer said. 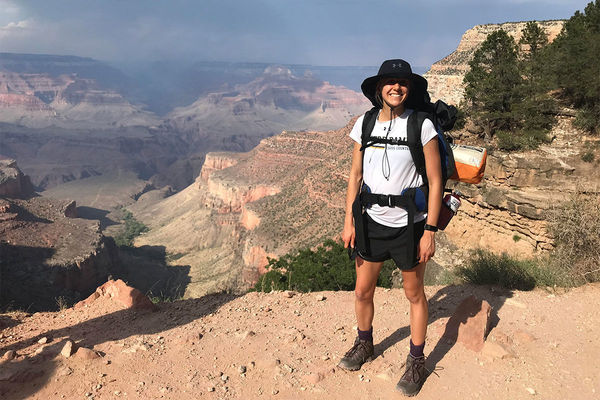 Rohrer, a neuroscience and behavior major, used her summer break to explore a variety of career opportunities in Flagstaff, Arizona.

She and some of her teammates on Notre Dame’s cross country team knew that Flagstaff was a great place for runners to train because of its high elevation, so they worked with the Center for Career Development to secure internships there based on their interests.

Rohrer interned with a neurosurgeon, a physical therapist, and an orthopedic physician, getting an inside look at different career possibilities.

Working with the neurosurgeon — where she observed an intensive spinal surgery and the patient’s quick recovery — was her favorite experience.

“It helped me realize how passionate I am about neuroscience and that I want to keep pursuing it in some way after graduation,” she said. “It also helped in my understanding of the human body and my appreciation for how durable it is and how it can heal itself.”

Rohrer interned with a physical therapist next. Though the experience helped her realize that she wasn’t interested in that career path, the physical therapist pushed her to engage with the patients — an important skill for any career. Finally, Rohrer worked with an orthopedic physician.

“I got to work closely with one of the physician assistants there,” she said. “That really sparked an interest in me to probably pursue PA school.”

In each rotation, Rohrer was able to see real-life applications for everything she has been learning at Notre Dame, especially when observing patients with neurological problems. Her courses also prepared her to have informed discussions with professionals.

“During surgery, I remember talking to the anesthesiologist, and he said many things that might have seemed really complex if I hadn’t taken the classes I had,” she said. “It was cool to be able to have those bold, intellectual conversations with adults and be able to understand and give my feedback.” 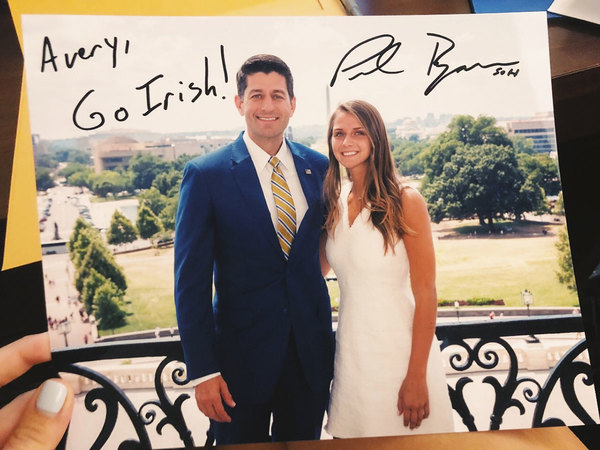 Political science major Avery Naylor interned with Paul Ryan, who at the time was speaker of the U.S. House.

Junior Avery Naylor interned for Paul Ryan, then-speaker of the U.S. House of Representatives, where she was able to observe the political process directly.

“I knew I wanted to work on Capitol Hill,” said Naylor, a political science major with minors in history and business economics. “To actually see it all makes a world of difference in my studies. I think you really have to be there to learn. ”

Since most congressional internships are unpaid, and Washington is an expensive city to live in, receiving the grant was extremely important, Naylor said.

While there, she enjoyed going to hearings, especially those related to health care.

“I’m really interested in health care, and the speaker’s health care policy adviser went to Notre Dame,” she said. “She kind of took me under her wing and let me go to events that I wouldn’t normally, like mark-ups of the Affordable Care Act and different things happening in health care.”

While learning about the inner workings of the federal government, Naylor also gained insight into the politicians themselves.

“Politicians are real people who have real feelings, who I truly believe are fighting for the same things and just have different ways of going about it,” she said.

The experience has also opened up further opportunities for her. While studying abroad in London this spring, Naylor is interning in Parliament, and next summer she will be working for Deloitte — giving her experience in both the public and private sectors.

Naylor’s Arts and Letters education has prepared her for any career, she said, from working on the Hill to working at a consulting firm.

“The College of Arts and Letters has given me a special edge by preparing me with the critical thinking skills needed to thrive in every work environment,” she said.

‘So many direct connections’ 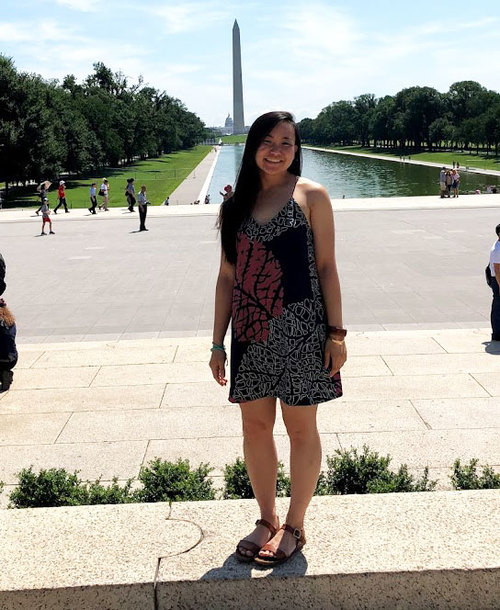 Senior Shannon Hennessey wanted to supplement her American studies and honors history majors and Chinese minor with an internship that fit her personal interests.

“I knew that I liked helping people and being with people, and I liked working with content,” Hennessey said.

Her internship at the Smithsonian Asian Pacific American Center in Washington, D.C., was the perfect blend of her passions.

“There were so many direct connections, especially with my American studies major,” Hennessey said.

Hennessey is of Chinese, Hawaiian, Irish, and Portuguese descent, making her work as a curatorial research assistant personally relevant and fulfilling. Her duties included conducting research for events and helping to develop a conference for elementary school teachers about the incarceration of Japanese Americans during World War II.

“It was awesome to be able to witness the important communication between educators in the field and the people who are trying to support them,” she said.

Hennessey also was able to see a wa’a, an ancient Hawaiian canoe that was given to the Smithsonian by a Hawaiian monarch. Being from Honolulu, this was a special moment for her — and one that helped shape her future plans.

“It showed me how important my heritage is to me,” she said. “I feel like I’ve been away for too long, and I need to go back home and be grounded again.”

Coming back to Notre Dame, Hennessey has realized how important it is to keep studying and learning about Asian Pacific American history. She has been able to apply the critical eye she gained from her time at the Smithsonian to many of her current classes, including courses on immigration in America and on American Indian boarding schools..

Hennessey is considering attending graduate school and pursuing a career in academia, as well as working for a nonprofit or museum — all opportunities that will allow her to learn more about her home and better serve her community. 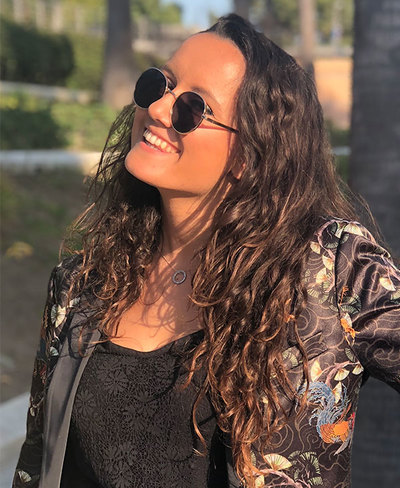 After senior Beatty Smith worked in Los Angeles the summer after her sophomore year, she knew that she wanted to return.

“I think I caught the bug. I had come from a small town in England where no one understood what it meant to have a career in film, and suddenly I was surrounded by people sharing my passion and my ambition,” she said. “In any coffee shop, there would be a screenwriter — or five — struggling over their latest masterpiece, a talent agent on the phone shouting at their assistant, and an actor getting caffeinated for their next audition. I loved it.”

Last summer, Smith, a film, television, and theatre major who founded the student Media Industry Club, interned at FX Networks and Annapurna Pictures in L.A., with the help of a grant from the Center for Career Development. Since the cost of living there was so high, the grant was integral.

“It massively influenced my decision. I doubt I would have been able to take the internships if I hadn’t been given the grant,” she said.

While Smith’s two positions were very different, both related well to her major.

“Everything I’ve been learning in film and television was applied at FX and Annapurna,” Smith said.

At FX Networks, Smith worked in the development and current series department where she wrote synopses for television episodes, worked at the front desk, and did script coverage — writing brief reviews of scripts to help the company decide whether to pursue them.

In addition, she had the opportunity to do a research project, which she decided to do about disability in film and television, since the disabled have been largely excluded from efforts to diversify the industry.

“They see a disability on a form and they assume that that person is incapable, which is not true most of the time,” Smith said. “The executives who attended my research presentation were very enthusiastic and responsive to my concerns, and many requested that my research be sent to them directly.”

At Annapurna, Smith worked in the publicity department where she assisted with many aspects of film promotion, from premiers to press junkets and more.

One of the most difficult aspects of her internships was condensing long scripts into brief summaries that could be read quickly and easily. Smith relied on the communication skills she honed in Arts and Letters for the task — and also had to learn to trust her own judgment on scripts. 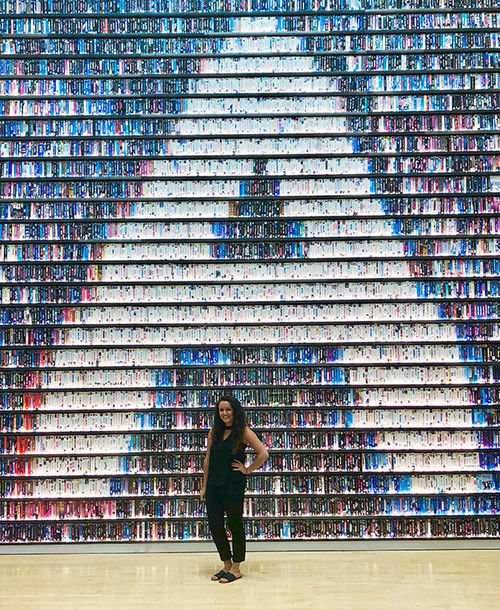 “They want you to have strong opinions,” she said. “There’s no point in you reading the script if you’re not going to give your opinion on it.”

Once she got to L.A., the Notre Dame alumni network made her feel right at home. The Center for Career Development put her in touch with area alumni who met her for coffee and helped her adjust to the city.

Though at the end of the summer, it was hard for Smith to leave the place she’s grown to love, she won’t stay away from L.A. for long.

She plans to move back immediately following graduation and hopes to work for a studio, production company, or talent agency. Wherever Smith goes in L.A., she’ll bring with her the skills she gained in her internship experiences and in her liberal arts education.

“I feel so much more comfortable going into interviews now because I have so much to talk about from my internships,” she said. “I’ve actually had some real world experience that I can talk about with confidence and passion.”