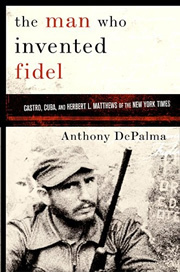 New York Times correspondent Anthony DePalma will speak on his new book, “The Man Who Invented Fidel: Castro, Cuba and Herbert L. Matthews of The New York Times,” at 4:15p.m. March 27 (Monday) in the auditorium of the University of Notre Dame’s Eck Center.

DePalma, who was a visiting fellow in Notre Dame’s Kellogg Institute for International Studies during the 2003-04 academic year, has worked for the New York Times for the last 20 years, reporting from Cuba, Guatemala, Suriname, Guyana, Montenegro and Albania and serving as the paper’s bureau chief in Canada and Mexico. He conceived his new book while doing advance research for the 79-year-old Cuban leader’s obituary and becoming fascinated by Castro’s famous 1957 interview with Matthews, a Times editorial writer.

Matthews’ interview, conducted in the Sierra Maestra mountains of southeastern Cuba, was an impressive journalistic “scoop,” upending nearly universal reports that Castro had been killed and his revolution against the dictatorship of Fulgencio Battista defeated. Evidently charmed by the charismatic guerilla and sympathetic to his cause, Matthews presented a flattering portrait which was crucial to Castro’s survival and eventual triumph and which remains controversial to this day.

DePalma lives in Montclair, N.J; he and his wife, Miriam, have three children, one of whom, Aahren, is a 2004 Notre Dame graduate.

The lecture is sponsored by the Kellogg Institute.

Contact: Kelly Roberts, publications and communications director at the Kellogg Institute, at 631-9184 or krobert2@nd.edu

Originally published by Michael O. Garvey at newsinfo.nd.edu on March 14, 2006.