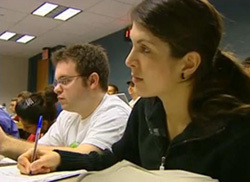 A promotional video for the University of Notre Dame’s College of Arts and Letters has won both a gold award in the recruitment category from Aurora International Awards and the Telly Award for best recruitment video.

The Aurora Awards is an international competition recognizing excellence in film and video focusing on non-national commercials, regional or special interest entertainment and corporate sponsored film and video. The Telly Awards honors the very best in local, regional and cable television commercials and programs, as well as excellent film and video productions and receives nearly 13,000 entries annually from around the world.