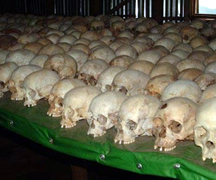 A memorial service marking the 13th anniversary of the 1994 Rwandan genocide will be held from 3 to 8p.m. April 14 (Saturday) in the Hesburgh Library’s Carey Auditorium at the University of Notre Dame.

Titled “A Journey of Rwandan Genocide Survivors: Seeds of Hope and Peace,” the event will feature a keynote address by Felicia Middlebrooks, morning co-anchor for WBBM Newsradio 780 in Chicago and producer/director of the documentary “Somebody’s Child: The Redemption of Rwanda.” Middlebrooks will introduce the film and answer questions following its screening.

Also speaking at the event, Rwandan genocide survivor Grace Mukasekuru will provide powerful testimony about what she endured at age 13.

As many as 1 million Rwandans were murdered in the 1994 massacre commonly characterized as an ethnic conflict in which militias of the Hutu majority attempted to carry out an “ethnic cleansing” of the minority Tutsis and Hutu moderates who opposed the genocide.

The event is organized by BERWA (be proud to be Rwandan), a group founded by former Rwandan refugees living in South Bend that promotes Rwandan culture and the advancement of Rwandans through education and social activities. It is co-sponsored by Notre Dame’s Kellogg Institute for International Studies’ Africa Working Group, Africa Faith and Justice Network, Notre Dame Holocaust Project, and International Student Services and Activities.