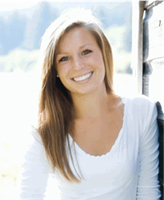 Elizabeth Davis, a Program of Liberal Studies major in Notre Dame’s College of Arts and Letters, has been named a 2011 Truman Scholar.

Established in 1975 as a “living memorial” to President Harry S. Truman, the prestigious scholarships include $30,000 in graduate study funds, priority admission and supplemental financial aid at select institutions, leadership training, career and graduate school counseling, and internship opportunities within the federal government.

Nationwide, just 60 college juniors are selected as Truman scholars each year, based on leadership potential, intellectual ability, and likelihood of “making a difference.”

Davis, who is passionate about food sustainability and hunger issues, is already making an impact. This fall, she founded the successful Waste-Free Wednesdays initiative in the campus dining halls, which helped raise awareness and cut food waste dramatically.

“It was wonderful to see the positive response to the campaign,” she says. “Individuals were wasting 1.25 tons of food a day—an average of 6.27 ounces per person per meal. We cut that to 3.11 ounces by the end of the month.”

Although she has long been interested in sustainability, organic food, cooking, and nutrition, Davis says her experiences volunteering at the Food Bank of Northern Indiana opened her eyes to the issue of food insecurity.

“People are not just starving in Africa, they are starving right across the street,” she says, noting that the number of people the food bank serves each week has grown from 300 in 2007 to 3,000 in 2010.

The contrast between that need and the uneaten food she saw being thrown away in the dining halls inspired Davis to create Waste-Free Wednesdays. “I wanted to dispel the misconception that food discarded by a single individual has no impact on the world’s hunger crisis,” she says.

Davis says the Truman scholarship will help her continue to pursue her interests in sustainability, social responsibility, and food distribution reform.

After a leadership training week with her fellow Truman scholars, the Montana native will spend five weeks this summer on Capitol Hill working for U.S. Sen. Max Baucus of Montana, a senior member of the Senate agriculture committee. Before returning to Notre Dame, Davis will head to New York City. The Director of Sustainability for PepsiCo has designed a weeklong program at its international headquarters for Elizabeth to meet with PepsiCo executives and employees and learn more about PepsiCo’s domestic and international sustainability and social responsibility initiatives.

During the school year, Davis interns at the University’s Office of Sustainability, sits on the Notre Dame Energy Center Student Advisory Board, serves as student representative on the Notre Dame Social Responsibility Committee, and participates in GreeND, a club that elected her co-president for 2011-2012.

She is also involved in the West Side Food Security Council, a coalition of 16 community organizations and six Notre Dame students led by 2010 Truman Scholar Elizabeth Simpson, a senior theology and peace studies major.

Davis says Simpson was a helpful guide throughout the rigorous process applying for the Truman scholarship, as was Ava Preacher, an assistant dean for undergraduate studies in the College of Arts and Letters; staff from the University’s Center for Undergraduate Scholarly Engagement; and Bernd Goehring, an assistant professor in the Program of Liberal Studies.

Goehring, for one, calls Davis an outstanding student—and inspiring person.

“Elizabeth is intellectually courageous,” he says. “In discussions, in her writings, in conversations outside class, she takes on the most demanding questions and complex issues … and she continues to raise these issues in various leadership roles for her fellow students, teachers, co-workers, and others.”

“My short-term goal is to help alleviate food shortages in the communities in which I live,” she says. “My long-term goal is to effect change in the allocation of food resources in the U.S. and the world.”