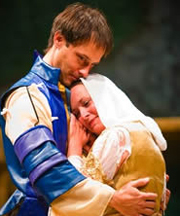 The 2008 Notre Dame Shakespeare Festival will present a mainstage production of Shakespeare’s “Macbeth” Aug. 19 to 31 (Tuesday to Sunday) in the Decio Theatre of the University’s DeBartolo Performing Arts Center.

“Macbeth,” Shakespeare’s infamous “Scottish play,” recounts the brutal rise and fall of the ill-fated title character, bringing to life the shortest and most ferocious of the Bard’s tragedies. Both a cautionary tale and a parable for our age, “Macbeth” is quick, raw and remarkably relevant. Parental guidance is advised for this production.

This year’s festival also has featured a Young Company production of Thomas Middleton’s “The Witch,” which will be presented in a final performance on Aug. 25 (Monday) at 7p.m., on the Main Quad in front of Notre Dame’s Main Building. There is no cost for this event.

More information is available on the Web at http://shakespeare.nd.edu.

Originally published by Julie Hail Flory and Aaron Nichols at newsinfo.nd.edu on August 12, 2008.