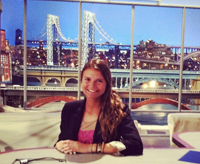 Millions of viewers tune in nightly to the Late Show with David Letterman, but these viewers don’t see the hours of preparation behind each evening’s episode. Last summer, Notre Dame student Kelly Taylor got the opportunity to be a part of the team that produces the popular television show.

Taylor ’13, a double major in American studies and film, television, and theatre, spent last summer in New York City interning for the show’s research department, thanks to the Arts and Letters Summer Internship Program (ALSIP) and Notre Dame’s Career Center.

The internship earned her academic credit but was unpaid. ALSIP grant funding allowed for Taylor to able to make the most of her experience. “I went into work just trying to do my best and didn’t have to worry about the monetary stuff,” she says.

The internship, Taylor says, was a great opportunity to leverage the many skills she has developed and honed as a student in the College of Arts and Letters, including public speaking, critical reading and analysis, research, writing, and organizational skills.

While she was responsible for a wide variety of production tasks, Taylor’s primary job was to help compile information on celebrity guests for the pre-show interview. “We had to find information from things like magazine articles, other interviews they’ve done, and their past work history and condense it to a packet of pertinent information,” Taylor says.

“I also learned you definitely have to assert yourself and show off your skills in order to make it in the industry,” she says, “but it’s ultimately very rewarding.”

Taylor says the internship—and being in New York City—provided some great networking opportunities as well.

“I definitely made a lot of contacts that may not necessarily help me get a job at the Late Show but can help me get a job in a similar field,” she says. “I know I can take those skills I learned at this internship to something other than TV.”

Despite having never been to New York, Taylor says she was also able to make the transition from “tourist to resident” during her time in the city. “By the end of the experience I could tell you stuff about all the boroughs, my favorite parts of Manhattan, and where to go on the subway without a map,” she says.

Taylor says she hopes her experience will help to create opportunities for other Notre Dame students.

“I hope that me being at the show and interning gives Notre Dame a name there. Hopefully I’ve started a tunnel for ND kids,” she says. “They know they do good work and are reliable.”