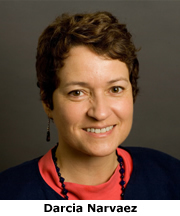 Like the previous six, expect “Harry Potter and the Deathly Hallows,” the final book in the Harry Potter series (to be released July 21), to prove inspirational to children, delivering messages of friendship, courage, kindness, loyalty and obedience, predicts Darcia Narvaez, associate professor of psychology and director of the Center for Ethical Education at the University of Notre Dame.

Narvaez says the Harry Potter books all have high RECS ratings and are good ways for children to learn about moral heroes.

“Harry and his friends show ethical sensitivity by noticing things that are wrong or hurt others,” she explained. "They show good ethical judgment by trying to understand problems before deciding what to do, and revising strategies when they don’t work. Harry and friends are especially ethically motivated because they show consistent commitment to help others, cooperate to reach positive goals, try to do things that help the community, and keep working at a goal even when it would be easier to quit.

“Most notably, however, the books are filled with ethical action. Harry and his friends put themselves at great risk to help others. They try to change things that are cruel or unfair and follow through on completing a moral goal, no matter the cost.”

A Notre Dame faculty member since 2000, Narvaez also is co-author of a chapter on character education in last year’s edition of the “Handbook of Child Psychology,” and has published articles in the Journal of Educational Psychology and Developmental Psychology and several books, including “Moral Development, Self and Identity.” She recently received a Spencer Foundation grant for a project titled “The Science of Virtue: Ethical Expertise for Morally-Engaged Citizenship” for which she will write a book.

Note to the media: Narvaez’s comments may be used in whole or in part. She can be contacted for additional commentary at 574-631-7835 ordnarvaez@nd.edu