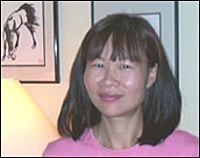 In 1947, an anti-government uprising in northern Taiwan led to the slaughter of some 20,000 citizens and contributed to a 40-year period of government suppression that effectively buried knowledge of the incident until martial law ended in 1987.

How the uprising re-entered the public consciousness through literature and film is examined in a new book by Sylvia Lin, assistant professor of East Asian languages and cultures at the University of Notre Dame. Called “Representing Atrocity in Taiwan: The 2/28 Incident and White Terror in Fiction and Film,” it is published by Columbia University Press.

A native of Taiwan, Lin has first-hand experience of living in a totalitarian state, exemplified by the era known as White Terror. During the 40 years of martial law, the government effectively suppressed challenge by arresting and imprisoning dissidents and by instilling a pervasive fear in the citizenry. The bloodiest of these acts occurred around Feb. 28, 1947, a melee that began when government agents harassed a woman who was selling untaxed, black market cigarettes.

Fearing retribution, Lin’s parents’ generation refused to discuss the 2/28 incident even in private. Unlike the Jews in the Holocaust or the Japanese who survived Hiroshima, Lin’s generation grew up unaware of this national tragedy.

The subsequent awakening provides a case study on the lasting cultural impact of atrocities, particularly as they are portrayed in literature and film. Drawing on abundant Holocaust scholarship of atrocity and trauma, Lin analyzes Taiwanese and Chinese literature and post-martial law cinema and identifies emotional and reflective patterns that appear across cultures.

Time is needed to support an environment in which art turns from themes such as anger or victimization to those that honor the sacrifice of the dead and grasp the tragedy of human suffering. However, Lin’s book cautions, the process demands judicious deliberation to avoid a reversal of interpretive tyranny after a regime change.

A member of the Notre Dame faculty since 2002, Lin teaches modern and contemporary Chinese literature, film and culture. Her research interests include Western missionaries and Chinese women, women and new culture in early 20th century China, language and identity in Taiwan, and narrative theory. She earned her doctorate from the University of California, Berkeley.

Originally published by Gail Hinchion Mancini at newsinfo.nd.edu on January 22, 2008.