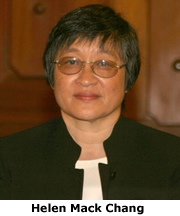 Helen Mack Chang, one of Guatemala’s most vocal advocates for justice and reconciliation of the country’s 36-year civil war and last year’s recipient of the Notre Dame Prize for Distinguished Public Service in Latin America, will deliver a lecture at 7p.m. Oct. 31 (Tuesday) in the auditorium of the University’s Hesburgh Center for International Studies.

Titled “La Muerte es Vida (Death is Life),” the talk is free and open to the public and will be delivered in Spanish with simultaneous translation in English. It will recount Mack’s fight to bring members of the Guatemalan military to justice for thousands of political killings, including the assassination of her sister, Myrna, and detail her creation of the Myrna Mack Foundation in 1993.

An anthropologist, Myrna Mack was stabbed to death in 1990 by members of a military death squad in response to her investigations of the destruction and massacre of entire indigenous communities by the Guatemalan military.

Helen Mack has succeeded in making significant progress in the fight for human rights, reform of the judiciary system, and fortification of the rule of law. In addition, she obtained the conviction of one of the soldiers accused of committing the crime against her sister — and several years later, the conviction of one of the three officers accused of masterminding her murder.

Mack is the recipient of numerous awards and accolades, including the Swedish Parliament’s Right Livelihood Award, known as an “alternative Nobel Prize.”

The event is sponsored by the Kellogg Institute for International Studies , which awards the Notre Dame Prize annually to leading political, civil and religious figures in Latin America.