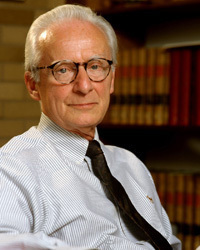 Ralph McInerny, the Michael P. Grace Professor of Medieval Studies and professor of philosophy emeritus at the University of Notre Dame, died Jan. 29 after a long illness at Our Lady of Peace Hospital in Mishawaka, Ind. He was 80 years old.

A native of Minneapolis, McInerny served in the Marine Corps before studying at St. Paul Seminary, the University of Minnesota, and earning a doctoral degree from Laval University in Quebec. After teaching one year at Creighton University, he joined the Notre Dame faculty in 1955, becoming one of its most affectionately regarded and respected members for the subsequent 53 years before his retirement in 2009.

“I love it here,” he once said of the campus on which he had never set foot until he was hired by Notre Dame’s then-new president Rev. Theodore M. Hesburgh, C.S.C. “I can’t imagine being anywhere else.”

McInerny was an internationally renowned scholar, author and lecturer who specialized in the works of Saint Thomas Aquinas, but who also wrote and lectured extensively on ethics, philosophy of religion, and medieval philosophy. He directed the University’s Medieval Institute from 1978 to 1985 and its Jacques Maritain Center from 1979 to 2006. At Notre Dame and other universities, he also served as a mentor for a new generation of Thomist scholars.

A man whose playful wit and easygoing and amiable manner belied herculean energies, McInerny, in addition to writing some two dozen scholarly books and hundreds of essays on medieval philosophy, ethics and the philosophy of religion, edited a widely praised series of translations of Thomas Aquinas for Penguin Classics. He delivered the prestigious Gifford Lectures in Glasgow in 1999-2000, served as president of the American Catholic Philosophical Association, the Metaphysical Society, the American Maritain Society and the Fellowship of Catholic Scholars, and was a fellow of the Pontifical Academy of St. Thomas Aquinas. He also was a member of President George W. Bush’s Committee on the Arts and Humanities.

When away from the library stacks and the lecture podium, McInerny wrote poetry and more than 80 novels, including the Father Dowling mystery series, which were adopted in 1989 for a popular television series the author steadfastly refused to watch. Many of his murder mysteries were set on the Notre Dame campus and teasingly featured his friends, colleagues and acquaintances in minor roles.

An enthusiastic, often controversial, but always charitable commentator on Catholicism, contemporary culture and occasionally his own university, McInerny wrote innumerable columns, essays and op-ed pieces while founding, editing and writing for Crisis and Catholic Dossier magazines.

Contributions in McInerny’s memory may be made to The Women’s Care Center, 360 N. Notre Dame Avenue, South Bend, IN 46617.

Originally published at newsinfo.nd.edu on February 01, 2010.