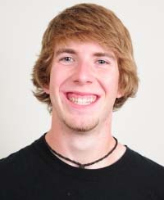 University of Notre Dame leaders gathered Thursday (October 28) to express their profound sorrow and grief over the death of Declan Sullivan, a 20-year-old junior from Long Grove, Ill., who died Wednesday (October 27) in an accident at a Notre Dame football practice field.

“There is no greater sadness for a university community than the death of one of its students,” Rev. John I. Jenkins, C.S.C., Notre Dame’s president, said in a media briefing Thursday afternoon. “There is certainly no greater sadness for a family than the loss of a son or brother. It is with a sense of that double sadness that, on behalf our university, I express our deepest condolences to Declan’s family, friends and classmates.”

“There’s a lot to learn here and we will learn it all in an expeditious manner.”

Father Jenkins celebrated a Mass of Remembrance in Sullivan’s honor at 10 p.m. Thursday in the Basilica of Sacred Heart. It was streamed live on the Web and overflow viewing areas were made available in the LaFortune Student Center.

Swarbrick said Saturday’s game against the University of Tulsa will continue as planned, in Sullivan’s memory. Players will wear decals on their helmets commemorating Sullivan; a moment of silence will precede the coin toss.

Swarbrick said Coach Brian Kelly’s primary focus at this juncture is the emotional state of members of the football program.

“Our focus is on the team, and on Declan,” Swarbrick said. “There is an intensity that attaches to the experience of being part of a team and an athletic program. Declan is part of that program. And so, the sorrow that is felt is even greater.”

A number of traditional home football weekend events have been canceled. The Thursday evening Brian Kelly Radio Show, featuring the Irish head football coach, has been canceled, as have the Friday football luncheon and pep rally.