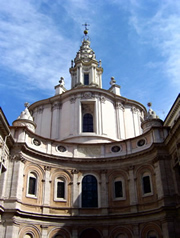 If not exactly a Roman holiday, it was evidently as pleasant as one. Perhaps it could be called a Roman working vacation.

However described, the “Primo Colloquio” or First Colloquium, held in June at the University of Rome La Sapienza, clearly delighted the eight Notre Dame faculty members in attendance.

Largely the initiative of Theodore Cachey, chair and professor of Romance languages and literatures and director of Notre Dame’s Devers Program in Dante Studies, and Piero Boitani, chair of La Sapienza’s department of comparative literature, the meeting was collectively sponsored by the Devers Program, Notre Dame’s Nanovic Institute for European Studies and La Sapienza’s Faculty of Sciences and Humanities. It brought together 16 distinguished scholars from both institutions in the chapel of the La Sapienza’s Villa Mirafiori to discuss their work.

On his return to Notre Dame Cachey pronounced the meeting a success. “It underscored the international resonance of the research being carried forward at Notre Dame while establishing a sound basis for future collaborations with colleagues in the humanities at the University of Rome La Sapienza,” he said.

The conference program was interdisciplinary and variegated, its topics organized in such broad and wide-ranging categories as comparative literature, history, classics, philosophy and cultural studies, and Italian studies.

“It was an exceptional and original idea for a scholarly conference,” according to Moevs. “The key was to choose the participants carefully and in the right combination, and then let them talk about whatever they were working on. So there was no theme to the conference, except work in progress. The result was that all 16 participants gave really interesting talks on things they were really interested in and were currently working on. All kinds of connections and themes naturally emerged, so that papers illuminated each other, and many ideas emerged which were useful or deeply interesting to people working in other fields.”

Moevs, who spoke at the conference on his research in the work of Dante, added, “I don’t think I had ever been to a conference before in which there was not a single dull paper, and in which you genuinely looked forward to each new paper and session. I think all the participants from both the University of Rome and from Notre Dame left the conference deeply impressed with the level of work at the other institution, and with a real sense of friendship, collegiality, and a shared intellectual enterprise.”

MacCormack, who spoke at the conference of her work on the 16th-century Jesuit intellectual and explorer Jos de Acosta, was similarly enthusiastic. “This kind of exchange of ideas is vital for the humanities at Notre Dame, we don’t have enough of it, and we’re all greatly indebted to Piero and Ted for taking the initiative. Ideas thrive by being shared, and knowledge can’t grow if it is not shared, explained, communicated. Of all this, the meeting at La Sapienza was a beautiful example, a real step in the right direction.”

A second colloquium, again bringing together faculty from both institutions, will be held at Notre Dame during the fall semester of 2008.

Originally published by Michael O. Garvey at newsinfo.nd.edu on July 10, 2007.