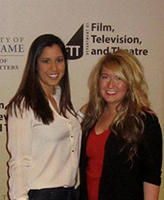 Grace Johnson, left, and Kelsie Kiley at the premiere of their documentary, Project Hopeful.

Project Hopeful, a documentary 2012 University of Notre Dame graduates Grace Johnson and Kelsie Kiley made for a course in the Department of Film, Television and Theater (FTT), is about a new kind of modern family: one where an Illinois couple with seven biological children doubles the size of its family by adopting orphans with HIV/AIDS and special needs.

Johnson and Kiley’s film follows Carolyn and Kiel Twietmeyer, the couple who started a nonprofit called Project Hopeful, and other families who have adopted children through the organization.

The FTT students decided to pursue the Twietmeyers and their organization after reading an article about them on GoodNewsGazette.net, a site that publishes only positive stories. Though the two had never worked together before, they agreed they wanted their film to spread the family’s message and not feel forced.

“We did more research about this amazing family and realized how inspiring their story was,” Johnson says. “They were very busy promoting Project Hopeful in Australia, so we thought we wouldn’t have enough time to shoot the proper amount of footage. That was when we decided to not only focus on their family but do a piece on two other Project Hopeful families, the Heims and the Allens.”

After deciding the topic of the documentary, Johnson and Kiley began gathering footage and immersing themselves in the families’ lives, everything from cooking, eating, playing, going to bed and taking their medication.

“I was expecting the families to be really serious about everything, but they were more serious about showing how easy it is to deal with HIV/AIDS,” Kiley says. “It was so interesting seeing how manageable the disease is and learning how these young children deal with this unfortunate stigma attached to the disease. These families are so inspiring and they deserve to be treated as such.” 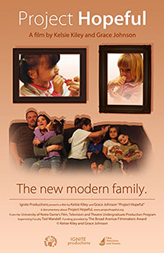 “It is such a rewarding feeling being selected for film festivals,” Johnson says. “Not only is it nice to know that people want to showcase something that you put so much work into, but it was doubly gratifying for us in that the Project Hopeful message will be seen and heard by many more people. These families deserve that recognition so much, and we are so happy to be able to contribute to that in some way.”

“Kelsie and Grace were a pleasure to have as students,” Mandell says. “They found an extraordinary subject and did a great job capturing the emotion involved in their story. The challenge in filming a documentary is to find an engaging subject and to allow the subject to tell the story instead of the filmmaker imposing their narrative on the subject.

“I think Kelsie and Grace achieved that and produced a wonderful document of the work that the Twietmeyers are doing.”

Johnson, who graduated as an FTT major and peace studies minor, is now a page for NBC in New York City. Kiley, who was also an FTT major, lives in New York and works as an assistant to producers at Lionsgate Films and Jax Media, LLC, a Lionsgate affiliate. Both of the alums are still planning to do more work for Project Hopeful.