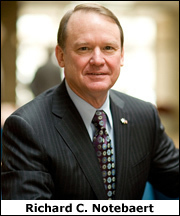 Richard Notebaert, chair of the University of Notre Dame’s Board of Trustees, and his wife, Peggy, have made a $10 million gift to fund a wide-ranging new fellowship initiative in the University’s Graduate School.

The Richard and Peggy Notebaert Premier Fellowships will provide significant financial support to the most promising doctoral students enrolled at Notre Dame.

Notre Dame’s president, Rev. John I. Jenkins, C.S.C., recently has emphasized the University’s commitment to outstanding undergraduate education and its Catholic character while also building “one of the preeminent research institutions in the world.”

The Notebaerts’ gift, he said, "cannot be characterized as anything less than truly transformational for the University. It allows us to build tremendous momentum in our efforts to develop a great university where research and graduate education are taken seriously. An outstanding program of graduate education, supported by this kind of extraordinary beneficence, enhances all aspects of the University’s mission and presence in the world around us.

“We are tremendously grateful to Dick and Peggy for their generosity.”

“Peggy and I approached the University to ask about a high priority that is difficult to fund,” Notebaert said. “I know well the value of an advanced degree in our global economy and am pleased that our gift will make a difference in this area.”

Notre Dame’s provost, Thomas Burish, added: “To enhance the Graduate School lies at the core of our aspirations for academic excellence. The Notebaert Premier Fellowships will provide an immediate and unprecedented boost to graduate studies, advancing not just one discipline, but the whole range of departments and fields in the Colleges of Arts and Letters, Science, and Engineering.”

The fellowships will be awarded on a competitive basis to each year’s top doctoral prospects. They will provide up to six years of funding that will cover full tuition, health insurance and a stipend that is among the most generous in the nation. As part of its commitment to dramatically advancing graduate education, the University will match expenditures by the Notebaert Premier Fellowship Program on a one-to-one basis, thereby doubling the number of fellowships available.

Notebaert fellows also will compete for grants for conference travel and presentations, travel for research purposes, and related professional activities.

All students accepted into the doctoral program at Notre Dame will be considered for a Notebaert Fellowship, and on average at least half of the Fellows will be Catholic.

“This gift will benefit our most qualified graduate students and places the Notre Dame Graduate School on more competitive footing with the nation’s most distinguished institutions of higher education,” Burish said. “The fellowships also will be an incentive to faculty recruitment. A strong resource base for fellowship support demonstrates Notre Dame’s commitment to graduate education and assures prospective faculty that resources will be available for supporting the best and brightest doctoral candidates in an aggressively ambitious program of advanced studies.”

Established in 1918, the Notre Dame Graduate School includes four divisions – engineering, humanities, science, and social sciences – and the School of Architecture. It embraces 22 doctoral and 43 master’s degree programs in and among 26 University departments, institutes and programs. Of the approximately 1,900 degree-seeking Graduate School students, 98 percent are full time and 70 percent are pursuing a doctorate. Over the last decade, more than 95 percent of Notre Dame’s doctoral degree recipients have gone on to research-related or degree-related occupations.

A member of the Notre Dame Board of Trustees since 1997, Notebaert became chair on July 1. He previously served as chair of the board’s University Relations and Public Affairs and Communication Committee and continues his service as a Fellow of the University.

A graduate of the University of Wisconsin, Notebaert is a member of the board of directors of Aon Corp. and Cardinal Health Inc. His professional activities include memberships in the Business Council and the International Advisory Council of the Executives’ Club of Chicago. By presidential appointment, he previously served on the National Security Telecommunications Advisory Committee.

The Notebaerts have two children, Michelle and Nicole, and five grandchildren.

Their gift is a component of the $1.5 billion “Spirit of Notre Dame” capital campaign. Announced last year, the campaign is the largest such endeavor in the history of Catholic higher education.

Originally published by Dennis Brown at newsinfo.nd.edu on February 11, 2008.