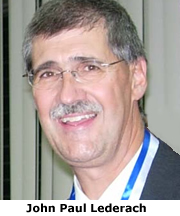 John Paul Lederach, professor of international peacebuilding at the University of Notre Dame, has been honored with the Order of the Culture of Peace award for his work in Nicaragua and around the world.

Presented Sept. 7 at the Polytechnical University of Nicaragua (UPOLI), the annual award is sponsored by the university’s Martin Luther King Institute in collaboration with the World Council of Churches peace program. The award was conferred with a medal featuring the face of the famed civil rights leader Martin Luther King.

Emerson Perez Sandoval, UPOLI’s president, praised Lederach’s efforts to build a culture of peace around the world through peace education and the direct transformation of conflicts.

“With deep gratitude we recognize that your contributions have included our own country, at a time when our society struggled with a cruel civil war supported by outside powers,” Sandoval said.

Lederach is internationally recognized for his experience in the field of conciliation and mediation. In addition to Nicaragua, he has engaged in peacebuilding efforts in Colombia, the Basque country of Spain, Northern Ireland, Somalia, Tajikistan and Nepal.

Lederach’s connections with Nicaragua began in the mid-1980s, when he and his family lived in Central America. He was working for the Mennonite Central Committee’s Peace Portfolio program as a resource person in the region. From 1986 to 1989, he worked almost exclusively as a member of the Conciliation Commission, which mediated between the Sandinista government and the political and armed East Coast movement known as Yatama, which represented the indigenous peoples.

“After years of working diligently and at times with great disappointment and frustration, direct negotiations were achieved that eventually ended the armed conflict in the East Coast,” Lederach recalled. “Our conciliation team was made up of religious leaders from Moravian and Protestant churches in Nicaragua. The Moravians represent the majority church among the East Coast peoples.”

UPOLI is the second largest university in Nicaragua, founded by Protestant leaders, though widely ecumenical. The official act bestowing Lederach’s award acknowledges his Mennonite faith and noted that his contributions “distinguish him as an ethical model, a person who coherently has integrated belief and action; theory and practice; word and life testimony.”

Lederach earned his doctorate from the University of Colorado and has been a member of the Notre Dame faculty at the Kroc Institute since 2001. He is the author of numerous books, most recently “The Moral Imagination: The Art and Soul of Building Peace.”