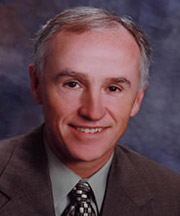 If the world had no further use for David Cortright’s scholarship, he’d be more than happy to retire.

“There was a fleeting moment when we thought that would be possible,” says Cortright, a self-described “nuke nerd” who has studied the proliferation of nuclear weapons and the threat of nuclear war during the 20-year life of Notre Dame’s Kroc Institute for International Peace Studies.

The moment came after the Cold War ended. The United States and Russia had successfully decreased the number of nuclear weapons they possessed from 30,000 and 35,000, respectively, to around 10,000 apiece. In the 1990s, he adds, blueprints for disposing of all nuclear weapons were proposed.

Until then, concern about nuclear warfare was so fraught during those days that scholars “sighed with relief” when it quieted, Cortright recalled. “The threat was less. We needed some relief, and we got it.”

But today, says Cortright, “In the opinion of a lot of experts, the risk of a bomb going off is greater now than it has ever been. There’s a new nuke world order, and a troubled one.”

India and Pakistan first obtained nuclear weaponry; now they’re engaged in a classic build-up scenario. The arms race between the United States and the former Soviet Union conditioned leaders of lesser powers to see nuclear weapons as “the coin of the realm.”

“We sent a message during the Cold War that the big gun is the ultimate protection. As India has begun to see itself as a great power, it has decided to go nuclear on the basis of national pride. It was all about being a great power,” says Cortright, who adds North Korea and Iran to the list – both countries whose quest for nuclear capability seems as much about threatening nearby U.S. troops as their own regional enemies.

Osama bin Laden “is the ultimate danger,” according to Cortright. Whether al- Qaida will amass the materials to make its own bomb, or buy a rogue weapon, bin Laden is determined to have one, and preaches that obtaining one is a religious duty, he says.

Earlier this year, the Kroc Institute revisited the issue of nuclear weapons with presentations by Rev. J. Bryan Hehir of Harvard University’s Kennedy School of Government. In the 1980s, as policy advisor to the U.S. Catholic Conference of Bishops in Washington, D.C., he was the chief architect of the bishops’ influential statement on nuclear weapons, “The Challenge of Peace.” Inspired by the bishop’s statement, Rev. Theodore M. Hesburgh, C.S.C., then Notre Dame’s president, and Joan B. Kroc, the Kroc Institute benefactor, came up with the idea of a peace studies program.

The 25th anniversary of the bishops’ statement provided the context for a conference last month on the “Future of Catholic Peacebuilding.”

In their original statement, “the bishops said it is never morally permissible to use nukes. But they didn’t call for their prohibition. To them, the argument that they served as a deterrent made some sense,” Cortright says.

“But now that we don’t have the Soviet communist threat, we should be more serious about figuring out how to get rid of these things. If they are immoral instruments by their fundamental nature, the moral implication is that they should be eliminated,” he said.

Originally published by Gail Hinchion Mancini at newsinfo.nd.edu on May 01, 2008.