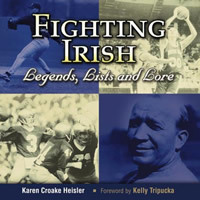 A new book titled “Fighting Irish Legends, Lists and Lore,” by Karen Croake Heisler, a faculty member in the University of Notre Dame’s Department of Film, Television and Theatre, is the first book to showcase the history of the University’s varsity sports programs.

The book, newly released from Sports Publishing L.L.C., captures the history, tradition and spirit of one of the nation’s most storied athletic programs. Year-by-year accounts chronicle the exploits and accomplishments of Notre Dame’s most famous athletes and coaches in every sport, while recapping the moments and legends that have become an unforgettable part of Fighting Irish lore.

“I think most Notre Dame sports `experts’ would be surprised to learn that baseball and track actually were the most popular and successful sports on campus in their early years,” Heisler said. “One characteristic of Notre Dame that hasn’t changed is that students, from the late 1800s on, remain tremendously invested in the success of Irish athletic teams.”

“Throughout the years, there have been several wonderful books written about Notre Dame football and basketball,” Heisler said. “While those two sports may be the crown jewels in Irish athletics, student-athletes and coaches in other sports have contributed just as much to the national reputation of the University, both on and off thefield. This book was a chance to showcase those accomplishments as well as illustrate the commitment of Notre Dame Olympic sport coaches who have dedicated their lives to helping young people find their way in the world.”

Heisler, whose husband, John, is Notre Dame’s senior associate athletic director, teaches “Introduction to Broadcasting” and “Cable and Sports and Television.” She served in Notre Dame’s athletic department for seven years, and formerly worked in athletics at Purdue University and the University of North Carolina. She also has served as programming and promotions director, producer and award-winning documentary writer at WNDU-TV, the NBC affiliate in South Bend, Ind.

To order the book, visit www.sportspublishingllc.com .