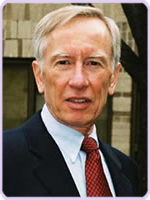 Pirates have launched some 96 attacks this year in the coastal waters of Somalia and hijacked 40 ships. Fifteen ships and nearly 300 crew members are being held hostage by Somali pirates as ransom negotiations continue.

Robert C. Johansen, acting director and senior fellow in the University of Notre Dame’s Kroc Institute for International Peace Studies, says that this state of affairs emphasizes the need for a standing United Nations naval force.

“It is high time to police the high seas to prevent piracy,” Johansen said. "This should not be considered a task for the United States or for Saudi Arabia or for any nation acting alone.

“The international community, working through the United Nations, should create a worldwide, high seas `coast guard’ to ensure that international law is enforced in areas of the oceans which are now under no country’s territorial jurisdiction.”

Because of the increasing international interdependence, Johansen said, “hijacking oil tankers or other forms of lawlessness undermines economic well-being and ethical standards of all people. As a result, all people should respond with a request for enforcing the law against piracy and for an international trusteeship to help struggling countries like Somalia to move toward legitimate government and economic reconstruction, thereby reducing the conditions that give rise to piracy while simultaneously denying those tempted to become pirates from preying on others.”

Johansen specializes in issues of international ethics and global governance, the United Nations and the maintenance of peace and security. He also conducts research on the role of non-governmental organizations in promoting compliance with international humanitarian law and the establishment of a permanent International Criminal Court.

Originally published by Michael O. Garvey at newsinfo.nd.edu on November 25, 2008.