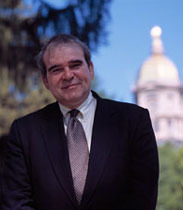 The outgoing Bush administration plans to promulgate a “right of conscience” rule permitting conscientious objection for doctors, nurses, pharmacists and other healthcare workers who refuse to participate in procedures they deem morally objectionable.

Federal law permits doctors and nurses to refuse to perform abortions, but the new rule would cover a wider range of healthcare workers and permit them to refuse to provide information or advice to patients seeking abortions.

According to David Solomon, W.P. and H.B. White Director of the University of Notre Dame’s Center for Ethics and Culture, the controversy generated by the new rule should indicate “just how bruising the coming battle over bioethics may be” as the new Obama administration takes power in Washington.

“Although President-elect Obama has signaled that he may be moving to the political center on matters of foreign policy and the economy, his appointments in bioethics suggest no such moderating moves,” Solomon said, adding that “the bioethics establishment at American universities, largely in thrall to the research scientists that dominate colleges of science at our leading universities, has been impatient with the constraints on controversial biotech research supported by the President’s Council on Bioethics.”

According to Solomon, a specialist in moral philosophy and medical ethics, “Everyone expects the council to be one of the first targets of the new administration. The president-elect’s widely publicized comment that he would sign the radical Freedom ofChoice Act on his first day in officesignaled the high priority he gives to changing the culture of bioethics in Washington. Formidable forces are being marshaled on both sides of the issues in this area and the coming months will likely see significant public controversy over the deepest issues in bioethics.”

Noting that Pope Benedict XVI’s new encyclical on bioethics will be published Dec. 12 and that numerous pro-life organizations are planning to take part in the March for Life in Washington two days after the new president’s inauguration, Solomon said that “all of the contending parties in the contemporary debates on bioethics seem to agree that this is a critical moment for the future of public policy on these issues. By Advent next year, we should have a better idea where our culture is headed on these matters.”

Originally published by Michael O. Garvey at newsinfo.nd.edu on December 03, 2008.