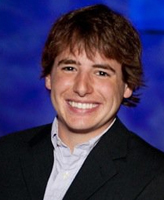 Pursuing three majors in the College of Arts and Letters while also participating in the Glynn Family Honors Program doesn’t leave Notre Dame senior Soeren Palumbo with much free time. But it’s been just enough to launch a global campaign to eliminate the use of the “R-word,” get published in the Huffington Post, rub shoulders with President Barack Obama, and travel the world for speaking engagements.

“I grew up with a younger sister who has an intellectual disability,” Palumbo says. “One of the things that bothered me most was people’s use of the word ‘retard’ and how that seemed to be okay in social circumstances.”

In 2007, Palumbo delivered a speech at his Illinois high school condemning the R-word. A video of the speech was posted on YouTube, where it quickly went viral. This prompted Special Olympics to invite him to travel to Shanghai as a global youth leader and spend a summer interning at the organization’s headquarters in Washington D.C. There, Palumbo met another college student, Tim Shriver, Jr., whose grandmother Eunice Kennedy Shriver founded Special Olympics.

The duo founded a college engagement program to bring Special Olympics and its R-word Campaign to university campuses worldwide. “We wanted a day of awareness centered on the R-word, with different events on different college campuses all at the same time,” Palumbo says.

After drafting a proposal for the program, complete with budget and marketing strategy, he and Shriver received approval from Special Olympics executives to launch the Special Olympics College initiative, dubbed Spread the Word to End the Word, in 2009.

The campaign has since grown to involve more than 250 colleges and universities, 1,000-plus high schools, and even elementary schools—across the United States and as far away as South Africa, India, and Malawi. So far, Palumbo and Shriver have collected verbal, written, and online pledges from approximately 10 million people who promise to eliminate use of the R-word.

They have also been working with activists across the country to remove the R-word from state and federal statutes. In October 2010, “Rosa’s Law” went into effect, removing the word “retard” from federal statutes, says Palumbo, who was with President Obama when he signed it into law.

Most recently, Palumbo and Shriver published an opinion piece in the March 1, 2011, Huffington Post to promote End the R-Word Day. Along with a website (R-word.org), they’ve taken advantage of social media sites such as Facebook and Twitter to help spread the message.

“This year was a great opportunity to let the campaign transcend the one word and address the big issue, which is bullying and stigmatization of the population with disabilities,” says Palumbo. “The word is a symptom; we now have the scaffolding in place to address the deeper issue.”

Palumbo’s battle against the R-word started at a young age, but he credits his education in Notre Dame’s College of Arts and Letters for much of his recent success.

Palumbo, who is also a philosophy major, says his undergraduate experience has also refined the way in which he communicates. “It’s given me the words to do it,” he says, “but more fundamentally, it’s taught me what things are worth fighting for and given me the opportunity to develop my interpersonal skills in such a way that I can be convincing.”

Although he will graduate from college in May, Palumbo plans to continue working to engage younger people in the R-word campaign while he pursues law and business degrees at the University of Pennsylvania.

“Our biggest goal is to make ourselves irrelevant—we know that we’re done when it’s no longer an issue,” he says. “We hope one day that we won’t need to do anything about the R-word.

“Our much larger goal is to contribute to a society that values all people, whether they have disabilities or no, and sees the contribution that they can bring.”