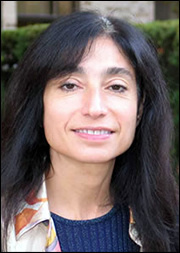 It was always presumed that Hosni Mubarak would easily win reelection as the president of Egypt in Wednesday’s polling, an election that the Bush administration has praised as a first step toward democracy. But the far more significant outcome of the election is that over the last year a strong and significant opposition movement against Mubarak went public, according to Geneive Abdo, a fellow in the Kroc Institute for International Peace Studies at the University of Notre Dame. Abdo is the author of “No God But God: Egypt and the Triumph of Islam” (Oxford University Press, 2000)

“Moderate Islamic activists are the backbone of this campaign,” she said.

“For the first time since the 1970s, thousands of Egyptians of all political and religious persuasions joined forces in street protests demanding political reform and an end to the regime. While a fractured opposition had operated behind the scenes for many years, the election inspired secularists, leftists, and Islamists to take the unprecedented step of coordinating their campaign against Mubarak’s predictable re-election.

Abdo added: “The demonstrations that gathered the most protestors were those organized by the Muslim Brotherhood and supporters of an Islamic group that split from the Brotherhood, called al Wasat, Arabic for the `center’ The protests are significant because they illustrate the power of Islamic leaders to mobilize tens of thousands of Egyptians who are usually too terrified to confront zealous riot police. Demonstrations in Egypt are officially banned, according to emergency law that has been in effect shortly after Anwar Sadat was assassinated in 1981. In the past, the Brotherhood and activists in al Wasat never confronted the regime directly. But now the Islamists have a strategy. The Sept. 7 presidential poll is but a dress rehearsal for parliamentary elections scheduled for November — polls in which the Islamists are likely to show their widespread popular support.”

Originally published by Matthew V. Storin at newsinfo.nd.edu on September 08, 2005.