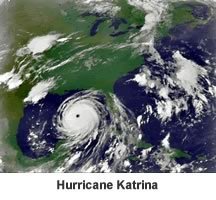 Even if the destruction from Hurricane Katrina matches that of Hurricane Andrew – which topped $25 billion in 1992 – the losses are only a portion of the total U.S. gross domestic product (GDP) of about $12 trillion, and the effects on the overall economy are likely to be small, according to three economists from the University of Notre Dame.

The most devastation will be felt by homeowners and businesses, where property damage could run into the tens of billions of dollars.

“If Katrina costs $30 billion, that is only about one-fourth of 1 percent of the U.S. GDP,” said Christopher Waller, an economist who specializes in monetary theory and dollarization. "To put this in perspective, it is equivalent to a typical (median) U.S. household losing $110.

“Such a loss would not cause a major disruption in the total spending and saving behavior of a typical household over the course of a year. The same is then true for the U.S. economy as a whole.”

With Katrina slamming the Gulf Coast, oil rigs that ordinarily pump 1.5 million barrels of crude oil a day have been evacuated, forcing the price of oil past $70 per barrel.

“Oil production in the Gulf of Mexico accounts for about one-quarter of domestic production,” said James Sullivan, an economist who focuses on labor economics and public finance. “The disruption could push domestic oil prices higher, but the effect is likely to be short-lived,”

With hundreds of thousands left homeless in Katrina’s wake, the housing industry is one that is destined to be affected most profoundly.

“The amount of rebuilding that will be required can cause the costs of construction to rise dramatically,” said Richard Jensen, chair of Notre Dame’s Department of Economics and Econometrics, whose research areas include environmental economics and international trade.

“In similar situations in the past, there has been a spike in the demand for construction materials such as wood and shingles, which will raise the cost of housing in a market already overheated.”

Originally published by Susan Guibert at newsinfo.nd.edu on August 30, 2005.