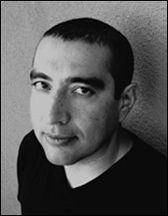 The University of Notre Dame Press has published “The Outer Bands,” a first book of poetry by Gabriel Gomez, winner of the 2006 Andrs Montoya Poetry Prize awarded by Notre Dame’s Institute for Latino Studies (ILS).

An expansive examination of language and landscape, voice and memory, where experimentation and tradition coexist, the book features poems that realize a dialogue between two worlds that employ an equally paradoxical imagery of the American Southwest and the marshes of southern Louisiana.

“The Outer Bands” concludes with its namesake poem, a 28-day chronicle of the period of time between Hurricanes Katrina and Rita, which together decimated the Gulf Coast region in 2005. It is a re-contextualization of images, news stories and political rhetoric that Gomez completed during a two-month emergency residency at the Santa Fe (N.M.) Art Institute after his home in New Orleans was destroyed.

Also a playwright and music journalist, Gomez, who now lives in Santa Fe, has taught English at the University of New Orleans, Tulane University, College of Santa Fe and the Institute of American Indian Arts.

The Montoya Poetry Prize, which is the first of its kind in the United States, recognizes a full-length manuscript by a Latino/a poet who has yet to publish a book. It honors the late Andrs Montoya, the author of the award-winning collection “The Ice Worker Sings” and the son of the renowned Chicano artist Malaquias Montoya, who was one of the first ILS fellows.