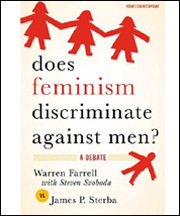 “Does Feminism Discriminate Against Men? A Debate,” by Warren Farrell and James P. Sterba, professor of philosophy at the University of Notre Dame, was published this month by Oxford University Press.

According to its publisher, the book’s co-authors offer “a sharp, lively, and provocative debate on the impact of feminism on men. Warren Farrell—an international best-selling author and leader in both the early women’s and current men’s movements—praises feminism for opening options for women but criticizes it for demonizing men, distorting data, and undervaluing the family. In response, James P. Sterba—an acclaimed philosopher and ardent advocate of feminism—maintains that the feminist movement gives a long-neglected voice to women in a male-dominated world and that men are not an oppressed gender in today’s America.”

Praising the book in an early review author and philosopher Tom Digby wrote that “the relationship between men and feminism has never been addressed in such an exciting and accessible way, or with such extensive and engaging evidence and anecdotes.”

A member of Notre Dame’s philosophy faculty since 1973, Sterba also is a fellow of the Kroc Institute for International Peace Studies. He teaches courses in ethics, social and political philosophy, and contemporary moral problems, including war and peace issues. He has published numerous other books including, most recently, “The Triumph of Practice Over Theory in Ethics.”

Originally published by Michael O. Garvey at newsinfo.nd.edu on September 27, 2007.