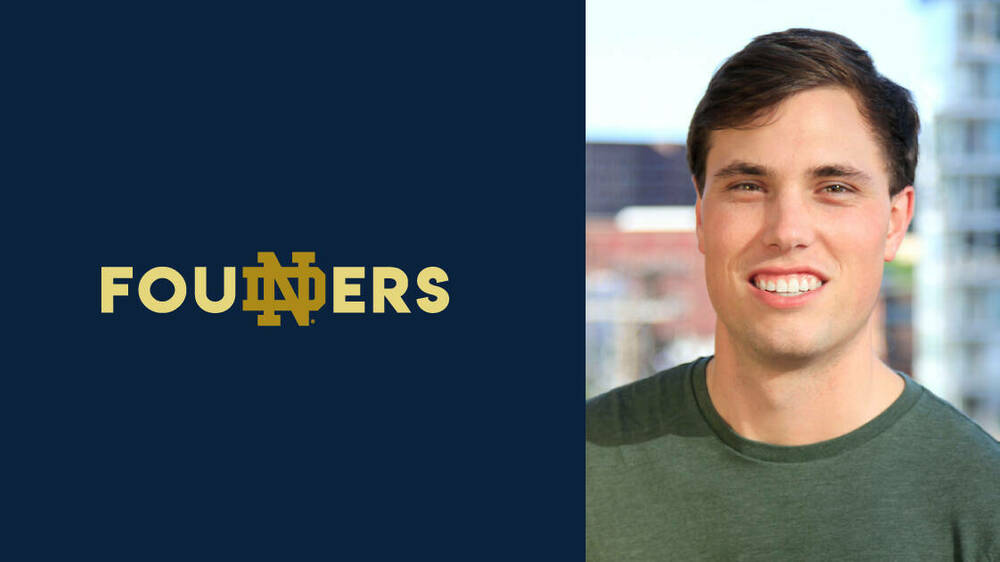 When the time came to choose a college, Dallas native John Wetzel '15 appeared to be following in his dad’s footsteps to the University of Notre Dame. However, the real attraction was a unique five-year dual degree program that combined mechanical engineering in the College of Engineering with industrial design in the College of Arts and Letters.

“I really enjoyed design and didn’t want to be boxed in to engineering, entirely. Notre Dame’s Reilly Dual Degree program treated both disciplines equally. So I applied.”

Once on campus, Wetzel’s passion for design soon converged with entrepreneurship. As a first-year student, he teamed with roommate and fellow engineering student, Mike Flanigan to construct one of the most impressive lofts ever seen in St. Edward’s Hall. Buoyed by this success, he and Flanigan launched a pop-up business at the start of sophomore year building lofts for others.

His eyes roll at the memory, “While our classmates were enjoying syllabus week, we were making daily trips to Home Depot in Mishawaka for building materials and then constructing lofts all evening. We built a loft a day for the first 10 days. It was crazy.”

The desire to create — and sell — things that were cool and interesting led Wetzel to The Shirt project, a Notre Dame tradition that began in 1990 to raise money for campus social clubs. Each year, one T-shirt design is chosen from among many and sold by students. It's become the student body’s uniform of choice for home football games. During the spring of his first year, Wetzel created the design for the 2012 version of The Shirt.

“That was pretty special,” he said. “Not only was it the 125th year of Notre Dame football, but we also went on to play for the national championship that year.”

Although the Irish didn’t walk away with the crown, The Shirt project did score nearly $1 million in sales. Buoyed by the fundraiser’s win, Wetzel stayed with project through his junior and senior years as vice president and then president. His passion for entrepreneurship was cemented.

Graduation presented Wetzel with a fork in the road: Follow the traditional high-powered career path in the Bay Area or New York City or do his own thing. Not to be boxed in, he applied for a two-year fellowship with Venture For America, a nonprofit founded by Andrew Yang that gives recent college graduates first-hand experience with high-growth companies in emerging startup ecosystems.

“I was chosen for the 2016 cohort of college graduates. Venture For America is an intense dive into entrepreneurship. While I was with the program in Cleveland, I was introduced to BoxCast, a live video streaming startup, and offered a job. I never would have found them without Venture For America,” Wetzel said.

"I was driving a forklift loaded with cubicles on the streets of Cleveland. Later, I was side-by-side with the CEO building desks. The company was very thrifty and got things done.”

When he joined BoxCast as a designer, there were just 17 employees. He started designing connected devices and hardware then segued into software. “As a small company, there were lots of opportunities to do and learn. I worked with sales, marketing and engineering, learning the fundamentals of running a business. It was empowering. Eventually, we grew to 30 people.”

Wetzel also developed an appreciation for the Midwestern approach to launching and growing companies. “BoxCast was lightly capitalized so we had to be very resourceful,” he said. “When we opened a new office, I was put in charge of managing the design. We scored free cubicles from a company that was shutting down and, at one point, I was driving a forklift loaded with cubicles on the streets of Cleveland. Later, I was side-by-side with the CEO building desks. The company was very thrifty and got things done.”

While at BoxCast from 2016 to 2019, Wetzel spent a couple of weeks in San Diego during Cleveland’s brutal winters. Realizing how easy it was to continue working as a product manager despite being 2,000 miles from his office, he became an advocate for remote work. “I believed remote work would be mainstream in five to 10 years. I even charted what business would look like if 30% of the workforce was remote by 2023. Remember, this was pre-COVID. I had no idea what was coming.”

With this prediction, Wetzel and a couple of friends — Alex Hilleary from BoxCast and Brooks Sime from Venture For America — started brainstorming startup ideas around the remote work trend. They identified 10 ideas before whittling it down to a few to pursue. One of the first was a global payroll solution for companies with employees in different countries. There are now several unicorns in the space, but payroll was not their skillset.

Next, the friends began looking at how human resources (HR) operates within remote work environments. “Remote workforces need structure to operate effectively. Culture doesn’t just happen. Processes have to be installed. These things don’t happen automatically,” Wetzel said. “We interviewed hundreds of companies with remote or semi-remote workforces to better understand their challenges and uncover opportunities for a business.”

As they dove deeper, they learned the weak link was in the human resources tooling. They didn’t have the software to support widely distributed workforces traditionally served with face time between management and front-line workers. Wetzel saw a niche for an HR tech solution.

“We interviewed hundreds of companies with remote or semi-remote workforces to better understand their challenges and uncover opportunities for a business.”

In 2019, Wetzel, Hilleary, and Sime co-founded Gather and began building a solution for companies to better manage key HR functions for remote workers. They participated in a pre-accelerator with Venture For America in Cleveland. It wasn’t a walk in the park, either. They had no funding. They built a first product then scrapped it after three months. After eight months, they launched a new product during the global pandemic lockdown in spring 2020 and began onboarding clients.

Despite a seemingly solid product-market fit, getting Gather off the ground was still excruciatingly difficult. “Doing a software startup in Cleveland is hard," admitted Wetzel. "The world doesn’t look at Cleveland and think tech.”

The saving grace was being accepted into Y Combinator’s Summer Class of 2020. With the pandemic lockdowns in full force, the three-month program was, ironically, held entirely remote. Still, Y Combinator’s immersion into entrepreneurship and all things startup proved invaluable.

“Coming from Cleveland, we had few connections in the Bay Area. Y Combinator gave us access to a powerful network and funders on the West Coast. It also gave us huge credibility. Y Combinator was key to making connections. The name alone opens doors to first meetings,” Wetzel said. “It also helped that COVID had accelerated the seismic shift to remote workforces and companies were really struggling with how to adjust.”

The Gather team’s time in Y Combinator allowed it to fine tune the Gather offering. Basically, they replaced tedious manual coordination of HR functions like onboarding new hires, employee milestones, and offboarding that had become more complex in a remote environment, with thoughtful, easy-to-use automation. Gather leaned on Slack, a digital communications platform designed to be faster, better organized, and more secure than email.

As Gather began to scale, Wetzel and his co-founders quickly learned that selling into company HR departments is a lengthy process. With no big venture capital money and a slow path to growth, they had to be creative to break through. They did so by inviting a number of people they didn’t know but had identified as potential customers to dinner in New York City.

“We were really hustling to win our first customer,” Wetzel said, “and we knew we had to build relationships and hosting a dinner was the perfect way to do that. One of the people who came became our first paying customer and later our largest customer. They were phenomenally happy with Gather.”

Having raised less than $1 million in capital, the Gather team leaned into its Cleveland roots for traction. “Our approach to growth was definitely Midwestern. We were scaling Gather slowly, methodically and being capital efficient,” Wetzel said. “Still, we needed more capital. When we tried to raise a seed round in August 2021, the venture firms didn’t like our niche, which was smaller companies, or our controlled approach to growth. Without additional funding, we either had to bootstrap Gather or exit. We decided to look for an acquirer.”

An introduction from an investor led them to ChartHop, another HR technology startup that aggregates employee data in one place to give companies a single, real-time digital space to create greater transparency and alignment in organizations. Gather’s emphasis on automated workflows to support key moments in the employee experience would complement and enhance ChartHop’s platform. But were they the right fit?

Wetzel liked what he learned about ChartHop’s founder and CEO Ian White. “Ian is a two-time founder and there was fantastic fit between our products. ChartHop had recently raised a $35 million Series B in the second quarter of 2021 from Andreessen Horowitz and other top investors. This gave me confidence that ChartHop was the right company for continuing to grow Gather. I’m very grateful the deal came together when it did in March 2022.”

"I would encourage college students and new graduates to work for a startup. Look for apprenticeships like Venture For America. Go find your way by listening and learning with someone else’s startup."

Today, Wetzel is a senior product manager at ChartHop. Surprisingly, transitioning from co-founder and CEO of his company to a management role with another has had significant upsides. “It’s definitely less stressful,” he said. “I just got married and want to start a family, so it’s a great time for more stability.”

Wetzel offered this advice to college students who want to start a company straight out of college: Don’t.

“I knew as a student at Notre Dame that I wanted to start a company, but I didn’t have an idea. More importantly, I didn’t have the context of what it took to start a business," he said. "I would encourage college students and new graduates to work for a startup. Look for apprenticeships like Venture For America. Go find your way by listening and learning with someone else’s startup. Another way to learn is to embed yourself in the startup community; you will literally learn by osmosis.

“I know I’ll start another company in the future and it will be even better because of my experience with Gather and now ChartHop,” Wetzel added. “For now, I’m focused on helping ChartHop grow and building a family.”

Originally published by Melanie Lux at ideacenter.nd.edu on December 07, 2022.