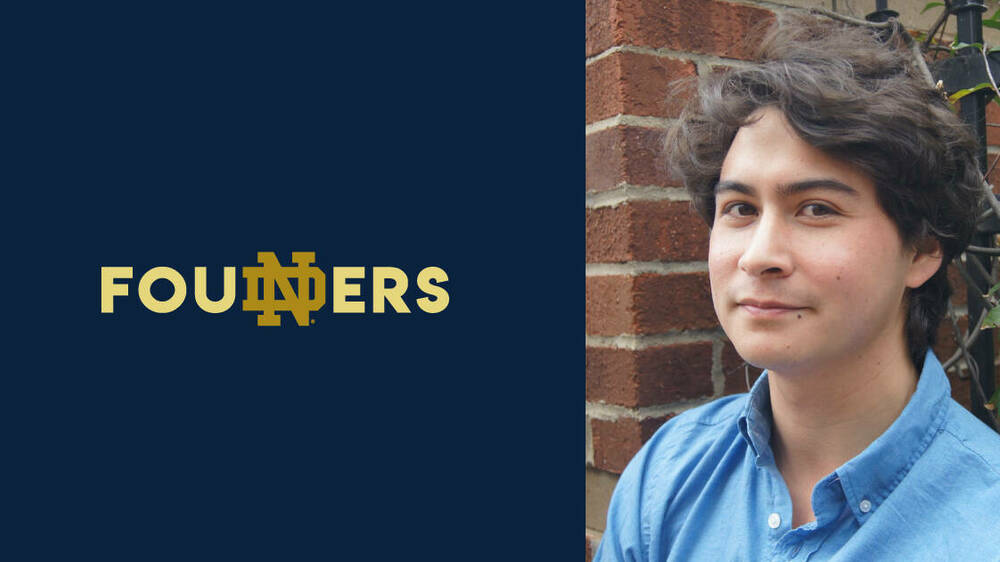 From a young age, Dominic Go was drawn to music. Living just a quarter-mile from the University of Notre Dame campus, he could hear the Fighting Irish marching band playing on football game days. While he didn't played tuba or any other brass instrument for that matter, he sang. All. The. Time.

“I was number seven in a family of eight kids, and I was always singing,” he said. “I was the annoying little brother.”

In sixth grade, Go's music teacher encouraged his parents to enroll the crooner in voice and piano lessons. They followed the advice and soon Go was playing piano and guitar, singing, and dreaming of being a professional musician.

When college rolled around, because his father worked in Notre Dame’s Office of Information Technology, Go qualified for tuition assistance. "That was hard to pass up but so was a degree from Notre Dame,” he said.

On campus, Go majored in music and political science. In addition to his formal musical training and performance, which leaned heavily on opera and a classical technique, he joined the Notre Dame Glee Club and The Undertones. While the all-male Glee Club performed traditional and barber shop quartet songs, The Undertones were an all-male pop-singing a capella group whose on-campus gigs were sellouts. He also performed in regional musical theater as a side gig.

He found more than his voice at Notre Dame, he found Colleen Huml. They've since married. “She was the director of Harmonia, the all-women a capella group and I was the director of The Undertones. We had our own Pitch Perfect competitive thing going on, but ultimately, we got together and started performing together.”

A passion for the music industry

After graduating, Go was initially on the fence about pursuing a professional music career. “I had my doubts. It’s a very binary industry. Either you’re incredibly wealthy or you live in poverty, there’s not much in between," he said. "Even touring musicians do it for the passion. There’s just not enough money in it."

He ultimately decided to give it a go. “I had dedicated my time at Notre Dame to music, setting aside my other interests. So I had to try,” he said.

More roles at regional musical theater and performances at bars and clubs followed. And when Better World Books — an online used bookstore with a social conscience — offered him a job as a project manager with a flexible schedule, he accepted.

His day job was great and he got the opportunity to explore another interest — technology, specifically data analysis and coding. For the next 16 months, Go worked on the tech side of Better World Books under the tutelage of his first boss, Paul Drake.

“He was incredible. He somehow saw potential in me, and so he granted me the autonomy to follow my interest,” Go said. “But I still had a passion for the music industry. I just had to go at it from another direction.”

Go formalized his technological training, moved to larger institutions, and eventually cultivated more than 10 years of experience in the field. Throughout this period of professional growth in the field of technology, the income disparity in the music industry  — due largely because if an artist wanted to make it to the big time, they had to go through a “kingmaker” — bothered him.

'Tech could be the solution'

“Back in the early days, talented musicians had to have a big record label behind them to pay all of the upfront costs of recording, marketing, booking appearances, and managing distribution channels or records and later CDs. When Pandora was founded in 2000 and Spotify in 2006, they solved the distribution problem by disrupting the music industry with livestreaming. But there was still a big problem. Independent artists still weren’t making any money,” Go said. “That was a problem for me. I thought maybe tech could be the solution.”

His “aha" moment on how to share the wealth with all music artists came during a trip to Asheville, North Carolina. “I heard a busker singing on a street corner and was floored. The guy nailed his song. I wanted to tip him but didn’t have any cash and there was no Venmo at the time. I felt really bad, but it made me think about a new way to pay artists.”

The new way ultimately became Go’s company Tambr, which he began building in 2015. In 2018, he completed the prototype and launched the platform and app. Tambr’s mission is to give all musicians a way to be heard while allowing them to monetize their music in a new and fair way. Fans then also had a way to find and support emerging talent and established local bands.

Tambr operates as a freemium model. There's no charge to musicians who use the platform, and they retain full ownership of their music. Users can listen for free but ads are part of their experience. Premium users who pay $7.99 a month don't hear ads, and they can listen to music offline and back the artist of their choosing. This directs $2 a month of their subscription to their favorite artist.

Go said some people roll their eyes at Tambr being just another streaming service. But when they understand 25% of the subscription goes directly to an artist, they’re all in. “We’re not trying to differentiate on price. We’re cheaper than Spotify and Pandora, but more expensive than a service like Ultimate Guitar Tabs. The price is really about trying to find a balance in the marketplace relative to our competition.”

To gain traction, Go approached musician friends from his Notre Dame days as well as from his professional career. Many gladly uploaded their music. Go, meanwhile, continued to iterate on the platform. In 2021, he added livestream capabilities. Performers embraced it, some doing more produced sets from a club or other venue, while other artists streamed from their homes. Listeners can donate to artists with just a click. The Tambr app is available on Google Play and the App Store.

“Some musicians are livestreaming performances every week. They are really excited to have a new tool. That’s the most gratifying thing for me."

In 2021, Go also earned a Master’s in Business Administration from the University of Chicago. He laughed at how that came about. “My wife wanted to go to medical school and let me know she’d be spending a lot of time studying for the MCA. I wanted to spend time with her, so I decided to study for the GMAT, the preparatory test for graduate school. I had no intention of going back to school. When I earned a top score, I didn’t want to waste it. I concentrated in economics and entrepreneurship and loved it.”

His MBA was well-timed; he's now focused on upscaling Tambr. In the early days, $200,000 from friends and family funded the company. Today, it's cashflow positive. Go is preparing to launch a $700,000 pre-seed funding round, with proceeds directed at user growth.

“To give new musicians a path to build their careers and thus have real impact on the artist community, we need hundreds of thousands of users," he said. "Fortunately, it’s very doable.”

Regional bands often have followings of 20,000 plus on social media platforms like Instagram. Converting them to premium Tambr subscribers can generate significant income. “If just 1,000 fans join Tambr as premium members and designate the band, that’s $2,000 in predictable monthly income. There are other ways for musicians to make money on Tambr such as direct donations and merchandise sales.”

Fundraising has been Tambr's biggest challenge; the space is crowded with Spotify, TikTok, Apple, and Amazon. Tambr isn't after the masses, though. Its target is the younger audience that enjoys finding new bands and solo musicians and appreciates the social mission of supporting emerging artists.

“When people say, ‘Do we need another music streaming service?’ my response is, ‘Did we need another shoe company?’ and then I point to Allbirds, which also has a social mission and is very successful. They also have a good product. As a consumer product company, we have to deliver on every experience,” Go said.

It's been rewarding for Go to see the joy of participating artists. “Some musicians are livestreaming performances every week. They are really excited to have a new tool. That’s the most gratifying thing for me,” he said. “I’ve also discovered a lot of new music myself.”

His advice to others who dream of starting a company: Be open to suggestions.

“I spent way too much time not taking feedback. It’s your baby and when you get feedback it feels like a personal attack. ... Learn how to discern useful and not-useful advice. Startups are a tough journey. We all need advice.”

Originally published by Melanie Lux at ideacenter.nd.edu on June 22, 2022.