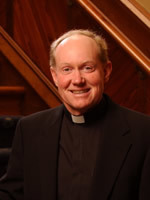 As national Catholic Schools Week (Jan. 25 to 31) approaches, the state of America’s parochial schools is in the spotlight, and the news is somewhat discouraging.

An article this week in the New York Times refers to the proposed closing of 14 elementary schools in the Diocese of Brooklyn, N.Y., as “not the deepest but only the latest of a thousand cuts suffered … as enrollment in the nation’s Catholic schools has steadily dropped by more than half from its peak of five million 40 years ago.”

Rev. Timothy R. Scully, C.S.C., professor of political science and director of Notre Dame’s Institute for Educational Initiatives (IEI), led the task force study and says the decline in enrollment in Catholic schools is largely due to finances.

“The principle cause is financial,” Father Scully said. "First of all, of course, there has been a huge transition in the faculty and staff who support the work of this wonderful apostulate. [There has been] a complete turnover in terms of the kind of leadership and staffing that we have in Catholic schools from 90-some-percent in the 1960s religious – who by their gift to the church subsidized Catholic schools at the time – to 95 percent today lay, who also subsidize by the gift of their salaries, which are lower than the public sector, but extraordinarily higher than the religious who subsidized and made these schools possible, built those schools.

“I’m afraid to say that I think our values have changed a bit in the Catholic community. I think that despite our increasing resource base, we have other expectations for our lifestyle and we have other priorities for our incomes.

“Study after study of philanthropy demonstrates a sad reality that the Catholic community is actually quite stingy when it comes to supporting church causes, and that’s not untrue when it comes to Catholic schools. I have to add an important caveat, and that is those parents who make the sacrifice are making a huge sacrifice.”

Turning the tide will require a universal effort, according to Father Scully.

“The fundamental shift that has to occur in the Church in order for our Catholic schools to recover the importance that they have always held is that we as a Catholic community have to commit ourselves to the work of this apostolate,” he said. “The work of Catholic education is the responsibility of all Catholics. It’s not just the responsibility of parents who have children. It’s the future of our Church.”

Father Scully directs the work of the IEI and is the founder of the Alliance for Catholic Education (ACE), Notre Dame’s signature program that sustains and strengthens under-resourced Catholic schools through leadership formation, research and professional service.

Founded in 1994, ACE places nearly 200 enthusiastic and faith-filled young men and women annually as full-time teachers in underserved Catholic schools throughout the country. ACE participants earn master’s degrees in education from Notre Dame during the course of their two-year teaching commitment. ACE also established a principal preparation program, the ACE Leadership Program, in 2001 to form the next generation of lay Catholic school principals, and more recently, the English as New Language (ENL) program in order to train and support Catholic school teachers who work with ENL students. Both the ACE Service Through Teaching and Leadership Programs prepare more Catholic school teachers and principals respectively than any other institution in the nation.

Subsequent to the Notre Dame Task Force on Catholic Education, ACE has augmented its efforts in the areas of research and professional service to Catholic schools through its ACE Consulting and Notre Dame Magnificat Schools initiatives.

Father Scully’s comments may be used in part or as a whole. To arrange an interview, please contact Melissa Green, mharraka@nd.edu .

Originally published by Julie Hail Flory at newsinfo.nd.edu on January 23, 2009.