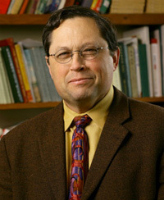 Though China does not appear to see it that way, the Nobel Peace Prize recently awarded to Chinese literary critic and activist Liu Xiaobo should be considered an honor “bestowed in a spirit of recognizing how far China has come, having delivered more than a quarter of a billion people from absolute poverty and opening itself to the world,” says Lionel Jensen, associate professor of East Asian languages and cultures and associate professor of history at the University of Notre Dame.

According to the prize announcement, the Norwegian Nobel Committee honored Liu “for his long and non-violent struggle for fundamental human rights in China.” He is currently serving an 11-year prison sentence for being one of eight principal authors of “Charter 08,” a manifesto which called for democratic reforms in China. Liu earlier served a two-year term for his role in the 1989 student occupation of Tiananmen Square.

China’s foreign ministry has called the award “a desecration” and warned that it will come at the expense of diplomatic ties between Norway and China.

“But for those who know and admire Liu, the award has provided a flash of inspiration and excitement,” Jensen says. “Chinese activists and reformers communicated on Twitter about trying to organize celebrations when they heard he had been awarded the Peace Prize.”

Those Chinese citizens who openly celebrated the announcement were met with police crackdowns and arrests, and CNN’s live coverage of the announcement was removed from the airways—citizens saw nothing but black screens.

“Internet portals interdicted all searches for ‘Nobel’ and ‘Liu Xiaobo,’” Jensen says. “On mobile phones his name was blocked. Still, those who wished to post their feelings about Liu’s receipt of the prize did so furtively (and successfully) by numerous circumlocutions of the name ‘Liu Xiaobo.’”

Liu’s fellow citizens were undoubtedly proud of this achievement, because it conferred a dimension of international recognition China has long desired—the Nobel Peace Prize, yet it is clear that the Chinese government is struggling with what it can only understand as a challenge by foreign powers to its legitimacy, according to Jensen.

“The Chinese government, unfortunately, reveals an intransigence that places national honor and achievement beyond an implicit understanding that its own citizens already possess,” says Jensen.