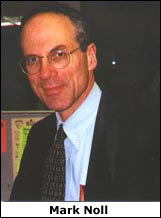 Televangelist Pat Robertson’s recent endorsement of former New York City Mayor Rudy Giuliani for president is “curious for a number of reasons,” according to Mark A. Noll, Francis A. McAnaney Professor of History at the University of Notre Dame.

“It undercuts the strong pro-life position that — from a traditional Christian point of view — has been the most admirable plank of New Right evangelical politics,” Noll said. "It passes by candidates like Mike Huckabee, whose positions on issues and whose general values would seem to be much closer to Robertson’s, or like Mitt Romney, whose positions and values have recently moved much closer to what Robertson has long championed.

“At least as viewed from afar by an observer privy only to the newspaper,” Noll concluded, “it would also seem to define the Rev. Robertson as just another in the long dreary line of American powerbrokers eager to sacrifice principle for electability.”

One of the nation’s foremost scholars of American religious and cultural history, Noll joined the Notre Dame faculty last year. A prominent participant in dialogues between evangelical and Catholic scholars, he is the author of numerous books including `The Scandal of the Evangelical Mind’; `The Rise of Evangelicalism: The Age of Edwards, Whitfield, and the Wesleys’; “America’s God: From Jonathan Edwards to Abraham Lincoln”; and, most recently, “The Civil War as a Theological Crisis.”

Originally published by Michael O. Garvey at newsinfo.nd.edu on November 09, 2007.