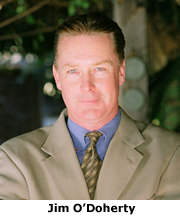 Jim O’Doherty, the Emmy nominated producer of “3rd Rock From the Sun,” will deliver a lecture titled “The Survival of the Sitcom in a YouTube World” at 6p.m. Monday (March 5) in Room 311 of DeBartolo Hall at the University of Notre Dame.

Part of the FTT Talks Lecture Series and sponsored by the Department of Film, Television and Theatre with an Arts and Letters Learning Beyond the Classroom Grant, O’Doherty’s talk was previously scheduled for Feb. 8. It is free and open to the public.

While broadcast television is facing intense competition from new media outlets, content-driven Web sites such as YouTube, which allows users to share video clips over the Internet, are thriving. A December 2006 Harris Poll found that 32 percent of regular YouTube users were watching less television as a result of the time they spent online. O’Doherty plans to discuss the competition television is facing as well as the current state of comedy on television, the future of the traditional sitcom, and the television industry’s challenges during a revolutionary era of programming uncertainty.

After winning a national stand-up comedy competition, O’Doherty entered the television industry in 1990. He started as a sitcom writer and went on to be executive-producer of “Grounded for Life” and “The Tracy Morgan Show.” Currently working with NBC Universal Television Studios, O’Doherty continues to write and produce half-hour comedy pilots.

Originally published by Kyle Chamberlin at newsinfo.nd.edu on February 27, 2007.