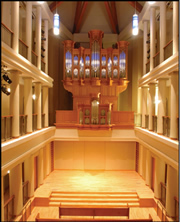 Internationally acclaimed organists from around the world are convening this week at the University of Notre Dame for the 2005 National Conference on Organ Pedagogy in the Marie P. DeBartolo Center for the Performing Arts.

The conference, which continues through Wednesday (Sept. 14), features a host of performances, lectures and master classes by top organ scholars, musicians and craftspeople and celebrates the first year of Notre Dame’s O’Malley Organ, which stands in the performing arts center’s Reyes Organ and Choral Hall.

“This has been one of my dreams during my 25 years at Notre Dame,” said Craig Cramer, professor of organ and artist-in-residence, who also organized and performs at the conference. “That we would be able to bring people to campus from my discipline and show them that we have a flourishing organ program and that the University is committed to educating the next generation of organists and church musicians. This is a significant event in my profession and in Notre Dame’s decade of the arts.”

Presented in conjunction with the American Guild of Organists (AGO), the conference focuses on the works of Dieterich Buxtehude with particular emphasis on keyboard techniques, improvisation, theoretical issues, performance, practice topics, and the historical situation of music in 17th-century North Germany.

The O’Malley Organ was hand-crafted by Paul Fritts & Co. of Tacoma, Wash., and has 2,550 pipes and 35 stops. It was funded through a charitable remainder trust from the late Marjorie M. O’Malley, a member of Notre Dame’s Advisory Council for the College of Arts and Letters from 1980 to 1986, who also provided funding for the Holtkamp organ installed in the University’s Basilica of the Sacred Heart in 1978.

The conference is sponsored by the AGO and performing arts center, as well as Notre Dame’s Boehnen Fund for Excellence in the Arts, College of Arts and Letters, Department of Music, Graduate School, Henkels Lecture Series, and the Institute for Scholarship in the Liberal Arts.

Originally published by Julie Flory at newsinfo.nd.edu on September 12, 2005.