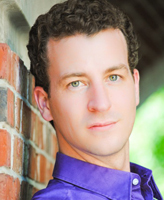 Lancaster, who was selected from among eight finalists, received a cash prize and an invitation to perform a soloist role in a major choral work during DCINY’s upcoming concert season.

By an audience vote, he was also declared the “favorite” among all the competitors.

“I was delighted when they announced I had won the audience award,” Lancaster says. “When I’m onstage, my number one goal is to connect with the audience and bring them into the musical and dramatic experience. It was an affirmation that I had accomplished this.”

“These two pieces are very contrasting yet both dramatic,” he says. “The challenge of singing the Orff is keeping a high energy level and singing lots of high notes with practically zero recovery time. It’s like a sprint.

“The Bizet is more challenging dramatically than technically. There are many changes of mood and accompaniment interludes that must be acted out clearly and convincingly in order for the audience to connect with the character.”

This is not the first time Lancaster has been honored for his vocal talent: In 2012, he was the central region winner in the National Association of Teachers of Singing’s Artist Awards.

Nor was this his first time in Carnegie Hall: In 2010, he debuted there as a guest with the Notre Dame Concert Band. Lancaster has also made guest appearances in Canada, Taiwan, and France.

At Notre Dame, Lancaster teaches voice to undergraduates as well as graduate students in the Sacred Music at Notre Dame initiative. He is also active in sacred music as a singer, organist, and choral conductor.

Lancaster says he is drawn to opera because it synthesizes music, singing, acting, theatre, art, and collaboration. “How could a singer not love acting in a drama where all the text is sung?”

Although a busy teaching schedule in the College of Arts and Letters keeps him from more time on the operatic stage, Lancaster credits his students with his win at the Nico Castel Competition.

“Honestly, this win belongs to my students, who keep teaching me to adapt and try again, and remind me of how much I love to sing—and need to keep on singing,” he says.

This fall, Lancaster will record an album of French melodies with Martin Katz, a celebrated pianist and collaborative piano professor at the University of Michigan’s School of Music, Theatre, and Dance.