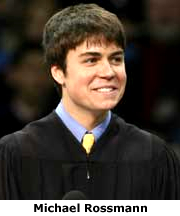 Just under four years ago, we students left this building at the end of freshman orientation unsure of what awaited us at Notre Dame. And parents, you said your goodbyes and returned to our old homes, similarly uncertain of what we would encounter here at school. Some expectations, such as northern__Indiana winters, late-night trips to the grotto, and obsessed football fans, were confirmed, but other preconceived notions were later modified. After reading about students at other universities placing cars on top of buildings, I expected similar rebelliousness here. And, during my freshman year, I heard about students climbing atop our very own Stepan Center. Yet, I soon discovered the uniqueness of rebellion at Notre Dame. Instead of placing large items atop Stepan or any other building, I heard of numerous friends ascending our geodesic and decidedly un-golden dome… to… pray the rosary. “What?” I asked. I likewise was taken aback when I noticed in my dorm that the most popular weekend spot was the__chapel for Sunday night Mass. The University’s faith foundation was instrumental in my decision to come here, though only after arriving as a student did I start to realize the distinctiveness of this place and the role faith plays in that distinctiveness.

Like many of my fellow Notre Dame graduates, I had the tremendous opportunity to study abroad. Near the completion of my program in Uganda, I was asked to give a talk to all the families who hosted students, so I sought suggestions from my Ugandan host family for what to say. Immediately, my host sister, Miriam, insisted that I must start my speech by saying, “I greet you in the name of our Lord, Jesus Christ.” I explained to Miriam that I wasn’t comfortable with this, as many students in my non-Notre Dame program didn’t practice any sort of religion. This led my host family to erupt in laughter and my host mother to ask, “But Michael, if they don’t have a religion, then what do they believe?”

In Uganda, as in much of sub-Saharan Africa, one’s faith typically permeates every aspect of life. Such can’t be said about the U.S. or Europe, particularly in the academy. Yet, Notre Dame proves an exception, and it is this exceptional nature that has both formed us and now compels us to go forward.

In October, a Harvard University committee announced proposed changes to its core curriculum for undergraduate students. Noting that students often struggle with an academic environment that is “profoundly secular,” 1 they recommended the addition of a class under the topic of “Faith and Reason.” Our own President Jenkins and Provost Burish coauthored an editorial in the Washington Post that commended the committee for taking this step and emphasized the continued need to integrate faith into the university setting. They wrote, “It’s time for universities to explore the reasoning that is possible within a tradition of faith, and to help their students appreciate this possibility and the rich resources in great religious traditions.” 2

The recommendation of our president and provost was ignored.In February, the Harvard course committee announced its final proposal that changed the class in “Faith and Reason” to one in a category entitled “Culture and Belief.” A Harvard faculty member and critic of the possible faith and reason course stated, “Universities are about reason, pure and simple. Faith – believing something without good reasons to do so – has no place in anything but a religious institution.” 3For their part, Jenkins and Burish hadargued that Notre Dame passes on the “intellectual riches” 4 of our religious tradition and that “educating students on the reasoning inherent in particular faiths is critical if we want students to be able to understand and engage their own and other religious traditions in meaningful ways.” 5

Moreover, real faith cannot be compartmentalized and nurtured only in church on Sundays. Faith must be lived, and faith has been evident in the hundreds of you who have gone to Appalachia or post-Katrina New Orleans to spend your fall, spring, or summer breaks in service. Beyond Touchdown Jesus or the chapel in every dorm, I have seen our Catholic identity in friends discussing their desire to promote justice and in meetings with the investment office on how our religious identity guides their decisions.

Upon recognizing the uniqueness of this place, however, we cannot pat ourselves on the back and think our job as Domers – as citizens – is done. Our distinctiveness has a purpose, and our identity as a Catholic university will be measured by how we go out from here and live our lives. Though we do it very well, the ultimate goal of this place isn’t to produce good university students; it’s to develop women and men of deep integrity, whose lives as parents, parishioners, business people, educators, doctors, and engineers are shaped by this foundation of integrating faith and reason. In his journal before visiting Uganda and the Millennium Village project there, Fr. Jenkins wrote, “Notre Dame can only be the Catholic university it strives to be if it devotes its time, talent and treasure to solving real-world problems.” 6 We, as graduates of Our Lady’s University, can likewise only live up to what this place aspires to be by engaging real-world issues.

But, there is a significant risk in this. In confronting global problems, we can’t rest as easily, can’t look at the world the same way, can’t help but ask questions about our place in society. Our lives become far more complicated. Before founding the Bill and Melinda Gates Foundation, now the world’s largest philanthropic organization, Bill Gates read an article about global diseases that mentioned how half a million children in the developing world die each year from diarrhea caused by rotavirus. Despite such a figure, death from rotavirus doesn’t make headlines in the U.S., and Gates himself__had never heard of it. He then asked himself, “How could I never have heard of something that kills half a million children every year?” 7

I believe college can be such a formative period for the frequency of moments when something “clicks” and changes us forever, complicating our previous understanding of the world. For some, the Notre Dame Forum held this past fall discussing the global health crisis likely ignited one of those moments. For others, a catalyst may have been volunteering in the local community and recognizing our country’s significant education gap or actually getting to know someone who is homeless. One of the many service programs in which you graduates will participate uses the motto of being “ruined for life” 8as a result of the experience. Parents and students, you probably didn’t save for years and take out loans with the explicit intention of being “ruined,” but Notre Dame has changed us, has ruined the `us’ that came here in the fall of 2003. We cannot see things the same way, and our lives are more complicated because of engaging the world with the resources of faith and reason. Moreover, our formation has cultivated in us a disposition to _continue_to be ruined as well. Yet, this expanded worldview, grounded in the integration of faith and reason, enables us to embrace the opportunity and our responsibility to make a difference and live out what this degree represents.

The life of someone like Fr. Tom Streit, a biologist and Holy Cross priest who works in Haiti to eliminate the spread of elephantiasis, illustrates the continued need for direct service to the world’s poor. At the same time, there are__Notre Dame alumni in the business world who use their skills and passion to mentor nonprofit organizations. The University also sponsors the__GLOBES program, which brings together a wide array of leaders to tackle environmental problems and has expanded my idea of how one can serve the world. Such diverse possibilities represent but a few among many ways to continue what has already been started in us. Just as this University’s mission doesn’t stop with who we are at this point, we have been formed – our lives have been complicated – to embark upon a lifetime of action.

Fellow graduates, as we leave this university, many of us have the enormous privilege of being able to live relatively comfortable lives when compared to the majority of the world’s population. At the same time, whether or not we live materially comfortable lives, we are ultimately called to live complicated lives. Respecting the principles of Catholic social teaching means that the lives of millions killed around the world by treatable diseases matter, just as the economic, social, and spiritual poverty that exists in our own neighborhoods deserves our attention. Such realities necessitate concern, sympathy, and action. Though the answers to these problems are not always obvious, turning the page of the newspaper and failing to ask “why” would betray what this place, with its Catholic foundation, stands for. We now share the opportunity and duty to live out what Notre Dame, grounded in both faith and reason, has planted in us. Even though our future coworkers may not wear The Shirt on every fall Saturday, nor be willing to climb atop the office building to pray the rosary, let us not leave behind all that has shaped and complicated our lives during our time at Notre Dame. Thank you.

Originally published by Michael Rossmann at newsinfo.nd.edu on May 20, 2007.