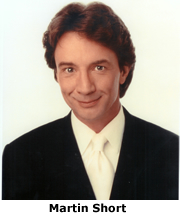 The question: “Which member of the University of Notre Dame’s Advisory Council for the Performing Arts will appear on `Celebrity Jeopardy!’ beginning this week to benefit student programming at the University?”

An acclaimed actor and comedian, Short will be among 30 stars of film, television, stage, sports, literature, government and fashion to participate in a two-week “Celebrity Jeopardy!” competition Nov. 8 to 21 (Wednesday to Tuesday), in which they will compete on the answer-and-question quiz show for at least $1 million to be donated to their individual special causes. Short, who is scheduled appear on the Nov. 17 episode, will play in support of programs at Notre Dame’s DeBartolo Center for the Performing Arts.

Short is best known for his work in comedy, particularly on the television programs “Saturday Night Live” and “SCTV.” He currently is performing on Broadway in the one-man show “Martin Short: Fame Becomes Me.” His films include “Three Amigos!” “Innerspace” and the 1992 remake of “Father of the Bride.”

A winner of 27 Emmy awards since its debut in 1984, “Jeopardy!” recently was inducted into the Guinness Book of World Records for the most awards won by a television game show. Hosted by Alex Trebek, the celebrity competition was taped last month in New York City’s historic Radio City Music Hall.

Originally published by Julie Hail Flory at newsinfo.nd.edu on November 07, 2006.