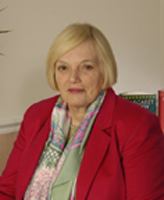 This fall brought with it the experience of a lifetime for Margaret Doody, the John and Barbara Glynn Family Professor of Literature at Notre Dame, who spent the better part of October 2011 in Singapore and China delivering lectures about the novel, women novelists, and the Enlightenment.

Doody, who was the first director of the College of Arts and Letters’ Ph.D. in Literature Program, is best known in China for her monograph The True Story of the Novel, in which she refers to Chinese as well as Western fiction. Her lectures were based on some of her previous and current work on the novel, and also the mystery novels she herself writes. Topics included “The True Story of the Novel Revisited” and “Characters in Novels.”

Doody’s Beijing itinerary entailed a total of six lectures along with several roundtables and meetings, keeping a video camera running the whole time to document her trip.

The most challenging part of the lectures and roundtables, Doody says, was the language barrier.

Some of the students she interacted with did not know English well, but they were all eager to practice and learn, she says.

Although there were language and cultural differences, Doody says she also found that the university setting there is similar to that in the States, and that Chinese professors and students are interested in Western methods of teaching. Doody told them that we, too, once took for granted the traditional lecture format in which the instructor stands before rows of seated students, but that we now desire the flexible classroom allowing for group discussions, film reports, and dramatic readings.

Academic vocabulary differs in interesting ways as well; they seem to be inventing a new vocabulary to deal with new times and ideas, Doody says. Instead of words such as “debate” and “argument,” the Chinese professors and students she met prefer “sharing,” a word they feel is more “democratic” and less combative, she explains. Overall, Doody says she found the students there to be determined, bright, and forward looking. They have hope for the future, she says, and could contribute a great deal to the world. 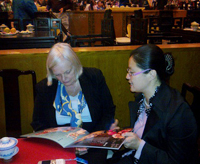 In addition to her activities at the universities, Doody says she was able to visit a number of sites and immerse herself in the culture in a way that made a big impression on her. She ate the most wonderful Chinese, Japanese, and Korean food; saw the set for the television film version of The Dream of the Red Chamber, one of her favorite Chinese novels; attended the Peking Opera to hear traditional performances (pictured below); and walked upon the Great Wall.

The Wall was the most memorable of these places, and Doody describes it as startling in real life. The Wall, she says, is “a giant structure going on like a great white worm” over hills and mountains as far as the eye can see. What film cannot capture, she remarks, is the “soaring space” and the view through “layers of mountains.”

Doody says she was lucky to be there on a clear, sunny day, since Beijing has much more smog than Los Angeles. While huge, the city lacks the kind of city center found in New York, Paris, and London, Doody says. Beijing is driven by industrial progress, much like Victorian London, and while it is not pretty, it is full of life, she says.

Doody’s experiences inside and outside of the university left her with a real sense of China and such an affection for it so that she still beams with excitement when talking about it. In fact, the trip had such a deep impact on her that she wants to encourage everyone to learn some Chinese and go to China because of its importance in the world and because of its vast and beautiful territory.

Now that Doody has returned home from the trip, there is talk about publishing her lectures in Chinese translations, and some of the research she produced for these talks will play a role in a book she is writing about characters in novels.

This book examines how different cultures view characters and what these characters can tell readers about a particular nation or group. The main character in The Dream of the Red Chamber, Dai-yu, for example, has a temperamental, witty, and creative character, one that does not give in to Confucian obedience and reflects a culture that has a great deal going for it. A culture’s anxieties, likewise, tend to manifest in characterizations, and Doody’s book will explore how this phenomenon occurs.

Doody says she also looks forward to finishing another book on the names of characters and places in Jane Austen’s novels, adding that it will be fascinating to see how the lasting effects of a Chinese tour make their way into her work on Western literature.