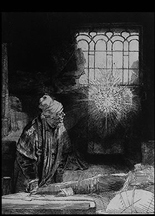 Once upon a time, in the Middle Ages, a German named Johann Faust made a reputation for himself as an alchemist who claimed magical powers. After he died in a laboratory accident, the powers of folklore and rumor shaped his story with this plot twist: Perhaps he had made a pact with the devil.

This is one version of the cultural origins that inspired one of the most enduring stories in literature, music, art and cinema, about a man who has turned away from God and made a deal with the devil to gain ultimate knowledge.

Attention to this story across the Notre Dame campus this academic year is providing an energizing experience for faculty, who make the case that no one should pass up the chance to participate. The Faust story, they might argue, is magic in itself, opening doors to knowledge in ways the charlatan alchemist could only dream.

Throughout the year, one version or another of the Faust story is being taught, performed or screened. The overall effort, coordinated by Stuart Greene, associate dean of the College of Arts and Letters, bears the humorous title “Life in the Faust Lane.” It culminates in April with several student performances, films and an academic seminar. (Details of the overall effort are available at nd.edu/~faust.)

Jan Hagens, associate director of College Seminar, suggested the Faust story for a multidisciplinary focus, and says, “the topic exploded into a million different directions.” He is teaching a sophomore seminar this semester on Christopher Marlowe’s versions of the Faust story, the same version the theatre department will produce in April.

“For 500 years people have latched onto Faust,” adds Alex Hahn, Kaneb Center director and another organizer. “They’ve put their problems of science, ethics and theology into the focus of Faust. It’s a great instrument for historical studies, to see the development of the Western mind in the last 500 years.”

Marlowe’s version, written in the early 1590s, was one of the first to develop the standard themes of the Faust story. But perhaps more well known is Goethe’s “Faust,” one version that is celebrating its 200th anniversary. Vittorio Hsle, Kimball Professor of Arts and Letters, taught that version last semester in a seminar for first-year students.

Comparing those two Faust stories alone illuminates the power of the story. Both authors are credited with advancing the power of literature. Goethe, who published two versions of the story, is credited with transforming the German language. Many of the phrases entered the language and became common vernacular, much the same as many biblical stories or Shakespearean plays have, notes Neil Delaney, director of the Arts and Letters Honors Program.

Hsle makes the case that Goethe’s “Faust” accomplishes the rare task of establishing a piece of national literature. Shakespeare is England’s literary hero, but there is no one work that is the British piece of fiction, and there is no such work that defines American literature.

The two pieces also reveal complex themes of spirituality. Christians would be repelled by a Faust whose search for knowledge suggests he is above God. But there is always the question: Does a loving God forgive even a character like Faust? The answer is different, depending on whether the version is Marlowe’s or Goethe’s. Delaney points out that in the Goethe version, God takes note of Faust’s passion to strive.

Faust’s sinister quest for knowledge is itself a theme that, in humankind’s pursuit of knowledge, is recurring, adds Hahn.

“Probably 30 or 40 years ago people would have connected the atomic bomb to the pact with the devil,” he said. “Today it’s stem cell research. Our attempts to gain knowledge, not only in a scientific sense, involve temptations.”

Notre Dame’s focus on Faust explores the classic pieces of literature, music and art. But the story is everywhere. Delaney, himself, has taught a seminar that compares the Faust story to the Oscar Wilde story “The Picture of Dorian Gray.” The character there trades his soul for youth and beauty. In the Broadway play and movie “Damn Yankees,” a fan makes a pact with the devil to help his favorite baseball team with the league pennant.

For someone who has thought a great deal about the Faust story, Hsle has a very simple reason why all members of the University community should make a date with some version of it.

Originally published by Gail Hinchion Mancini at newsinfo.nd.edu on March 17, 2008.