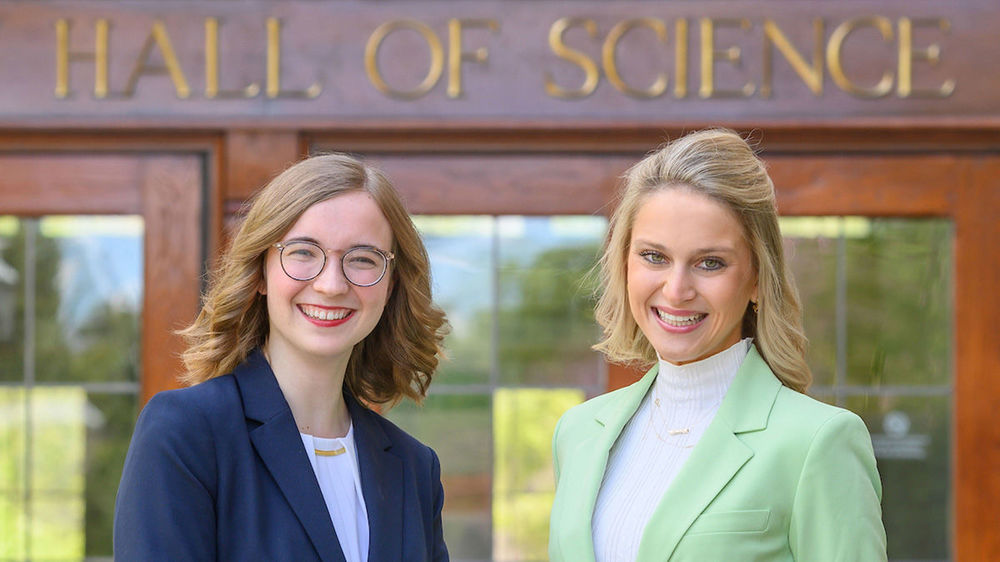 Madeline Owen of Columbus, Ohio, has been named valedictorian and Alexis Waldschmidt from Naperville, Illinois, was selected salutatorian of the 2021 University of Notre Dame graduating class.

The 176th University Commencement Ceremony will be held in-person May 23 (Sunday) in Notre Dame Stadium for graduates and a limited number of guests. During that ceremony, Owen will present the valedictory address and Waldschmidt will offer words of welcome and thanks on behalf of the graduating class and introduce the valedictorian.

A neuroscience and behavior major in the College of Science, Owen minored in poverty studies and was a Glynn Family Honors scholar. She is the recipient of Notre Dame’s prestigious Stamps Scholarship, a full merit scholarship based on academics, character, leadership and service. She carries a 4.0 grade point average, was an early inductee into Phi Beta Kappa honor society, has been a member of the University’s Dean’s List since fall 2017 and was named 2019 Outstanding Undergraduate Researcher in the bioengineering research department.

Owen was a research aide in three labs during her tenure, including the Donny Hanjaya-Putra lab where she studied stem cell therapies in vascular regeneration for diabetic patients. She was also the recipient of the Naughton Fellowship Award, enabling her to research bone marrow stem cells in bone formation at Trinity College Dublin. She has presented at academic conferences and published works in international journals associated with her research.

As an undergraduate, she was a campus tour guide and student-athlete tutor for four years and was involved with numerous service activities including Memorial Hospital patient volunteer, Aquatic Relief for Kids, Breen-Phillips Hall council and Notre Dame Red Cross Club. She is also the founder of Summer Camp Youth Project, an organization providing supplies to camps serving disabled and disadvantaged youth.

After graduation, Owen will attend Northwestern University Feinberg School of Medicine. Her goals include serving patients through surgical repair, regeneration and prevention of musculoskeletal and neuromuscular diseases or disorders. She is also passionate about serving Shriners Hospitals for Children, veterans’ health care needs, rural mountain west communities, and international medical organizations such as Operation Walk.

Waldschmidt, a biological sciences and Chinese major, is a member of the University’s Phi Beta Kappa honor society and Dean’s List. She carries a 4.0 grade point average, was named valedictorian of the biological sciences class of 2021, received the department’s Paul F. Ware, M.D., Excellence in Undergraduate Research Award and was chosen as the College of Science’s Dean’s Award winner. She is also a Fulbright Scholarship recipient.

Throughout her time at Notre Dame, Waldschmidt worked as an undergraduate research assistant in four laboratories, including Joseph E. O’Tousa’s lab studying genes responsible for normal visual function in mosquitos. She served as a teaching assistant for several courses, including Michelle Whaley’s lab where she was the lead teaching assistant.

Over the past four years, she has worked as a tutor for student athletes and first-year students in genetics and general biology and served as a certified nursing assistant at a residential nursing and rehabilitation facility.

Waldschmidt has presented a number of academic works and has been involved in the University’s annual Chinese Speech contest, where she won first place in 2018 and second place the following year. A volunteer with Big Brothers Big Sisters, she also volunteered on the Notre Dame first aid services team and played violin in the Notre Dame Symphony Orchestra.

Her plans include continuing to work with the O’Tousa Lab as a full-time laboratory technician and continuing her studies in biology, with the goal of becoming a professor of biological sciences. Waldschmidt plans to incorporate her love for Chinese language and culture into these plans by either conducting research in or studying in mainland China or Taiwan in the future.

In her role as salutatorian, Waldschmidt will also be prepared to deliver a valedictory address should the valedictorian be unable to do so.

The Notre Dame valedictorian and salutatorian selection process begins by identifying the top three students with the highest grade point averages in each college or school. Those students then complete an application process that includes letters of recommendation from faculty members and a draft of their commencement speech. A selection committee chooses finalists who are approved by University President Rev. John I. Jenkins, C.S.C.