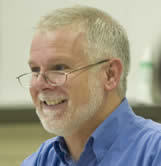 Steve Fallon has spent a good part of the summer at birthday parties—international birthday parties, in London and various locations in Australia. The guest of honor, born 400 years ago, was John Milton, author of numerous poems and polemics, including “Paradise Lost.”

Fallon, a professor of English at the University of Notre Dame, has written or edited three books on Milton, including a definitive volume on his complete poems and essential prose. He specializes in Milton and intellectual history, particularly the theological and philosophical contexts. Like most, Fallon fell in love with Milton’s breathtaking epic “Paradise Lost;” he later came to admire him as a theological, political and ethical thinker.

Here, Fallon spreads some Milton birthday spirit by explaining what Milton had to do with no-fault divorce, free speech and a handsome, fast-talking Satan.

Q: Milton sometimes is referred to as a poet, sometimes as a polemicist. How multidimensional was he?

A: He is the greatest English-speaking narrative poet. The international language of the day was Latin, but he made a conscious decision to write for his countrymen. He was intensely patriotic. He was a political theorist of some acuity, a Republican and a fierce opponent of the monarchy who defended the execution of King Charles before a European audience. During England’s civil war decade, the 1640s, Milton laid aside his career as a poet to take up his duty for England. He began publishing polemical prose, writing, as he put it, with his “left hand.” It is hard to characterize these works from a 21st- century perspective. Milton argued for republics and against monarchy; he opposed government restrictions on the liberty of citizens; and at the same time he was a puritan theocrat, believing in rule by the Godly. He was a champion of freedom of the will and an opponent of Hobbes’ determinism and absolutism.

Q: Often, the words or concepts of enduring writers become a part of our culture, so that their contributions are always with us, even if we don’t realize the source. Is this true of Milton?

A: A term he gave us is “self-esteem.” He bridled at the claims of hereditary aristocracy; he thought one had to have a sense of self-esteem as one negotiated these hierarchies. His “Areopagitica” is one of the earliest and most famous essays on free speech. Milton did not coin the phrase “no-fault divorce,” but he was alone in his time in arguing that when two are incompatible because of their innate temperaments or inalterable natures they should be free to separate. Here, he was against rigid ecclesiastical law that chained people rather than freed them. He saw that a misinterpretation of scripture. It was the outcry against his writings about divorce, which the government threatened to censor, that led him to write about free speech and against pre-publication censorship.

Q: You’ve worked most of your professional career on issues of Milton and theology. Can you give us a small sample of enduring or fresh veins of inquiry and controversy?

A: I’ve been involved in trying to understand Milton’s theology, and that involves reading theology contemporary to him to determine where he’s conventional and where he’s unusual. In “Paradise Lost,” he will “assert eternal providence/And justify the ways of God to men.” That can sound merely pious, as though he’s a good Christian poet doing what Christians are supposed to do. But in his time it amounted to throwing down a gauntlet. The Calvinist majority thought that one should not presume to raise the question of divine justice because justice is defined as what God does. Milton, for his part, wrestled with this question.

Milton is a subtle student of evil. In “Paradise Lost,” Satan is physically attractive and rhetorically persuasive—someone who could tempt us. Many readers, especially since the romantic period, take the view that in “Paradise Lost,” Satan is the true hero and that God is repressive. Another view is Milton is trying to celebrate God and denigrate Satan, but fails. Still others argue that Milton succeeds in anatomizing evil in the figure of Satan and justice in the figure of God.

Scholars are still discovering how Milton’s various heresies (he denied, for example, the full divinity of the Son of God and the natural immortality of the soul) inform his poetry. Another hotly debated topic, since 9/11, is whether his play “Samson Agonistes” is an apology for religious terrorism.

Q: How does Milton play to the Notre Dame audience?

A: One thing I love about teaching here is philosophical and theological questions are real questions for the students. Are our souls immortal? Are our wills free? Notre Dame students care about these questions.

A: It’s easy to think of classic texts as long, forbidding and boring. What I find again and again is literary classics are classics because they are beautiful and because they require us to wrestle with the deepest questions.

“Paradise Lost” is one of the great landmarks of world literature, and English speakers can read it in our native language. He set out to do what Virgil had done for Latin, what Dante had done for Italian. Reading Milton, we can gain some glimpse of the depth and complexity that we miss when reading earlier epics in translation. Amazing things happen in and between every line.

Originally published by Gail Hinchion Mancini at newsinfo.nd.edu on September 12, 2008.