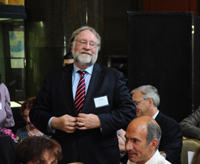 In the lobby of the Baltimore Sun offices, beneath a photo of the newspaper’s late, legendary journalist and essayist H.L. Mencken, there is a quote: “As I look back over a misspent life, I find myself more and more convinced that I had more fun doing news reporting than in any other enterprise. It is really the life of kings.”

To University of Notre Dame alumnus Mike Leary ’71, those sentiments feel about right.

While working at the Sun as national editor and assistant managing editor from 2000 to 2007, the former history major from the College of Arts and Letters often glanced at the quote—and now says, “I’ve never done anything else, nor would I want to.”

Hardly one to have “misspent” his life, Leary recently was named senior vice president and editor of the San Antonio Express-News.

In 2011, while with the Philadelphia Inquirer, he also oversaw a team of reporters responsible for an investigative series, “Assault on Learning,” which won the Pulitzer Prize gold medal for public service last year. The award is considered the highest honor for a journalist.

In its announcement of the 2012 awards, the Pulitzer Prize Board said the Inquirer series won “for its exploration of pervasive violence in the city’s schools, using powerful print narratives and videos to illuminate crimes committed by children against children and to stir reforms to improve safety for teachers and students.”

Leary deflects the accolades and offers praise to his reporters and photographers but does concede that “ink runs in my veins.”

He grew up in a small northern Wisconsin town among thundering printing presses and deadline pressures. His family has owned the Rice Lake Chronotype since the 1920s, and his father, Warren ’44, encouraged in his son a passion for journalism—and for Notre Dame.

“For years I had been to campus and seen football games, so Notre Dame was an integral part of my life while growing up,” Leary says.

Later, at Notre Dame, Leary complemented his history coursework with a heavy dose of German classes. He also signed up to a study abroad for a year in Innsbruck, Austria, where the late Professor of Philosophy John A. Oesterle directed the collegiate seminar program.

“The critical thinking from the seminar tied into the moral and ethical issues we confronted while watching the 1968 Soviet crackdown in Czechoslovakia soon after we arrived,” says Leary, who traveled from Austria to Czechoslovakia to see events unfold firsthand.

This combination, he says, of up-close experiences and historical studies provided a contextual foundation for his burgeoning career as a journalist.

And conversations with Oesterle and his wife, Jean, who was a Latin translator and editor working in the Hesburgh Libraries, “whetted my interest in becoming a foreign correspondent.”

While crediting the College of Arts and Letters for introducing him to a wide range of disciplines and topics, Leary says he also believes in the importance of specializing in at least one subject.

“If journalism is the first draft of history,” he says, “it’s not a bad thing to have studied history.”

After Notre Dame and an internship at the Milwaukee Sentinel, Leary again followed in his father’s footsteps by pursuing an M.S. degree in journalism at Columbia University.

Two decades after his year in Innsbruck, Leary found himself back in Europe while working for the Inquirer as a foreign correspondent during the fall of Eastern Bloc countries including Czechoslovakia, East Germany, Hungary, Poland, and Romania.

“It was the right time for someone who speaks pretty good German to be there,” he says, adding that his history and political science education helped get him there, too.

Leary marvels at how quickly democratic institutions took root in Eastern Europe. While covering the overthrow of Communism in Poland, he says, “my translator and I skirted police watchers to talk to Lech Walesa in his tiny apartment in a working-class neighborhood of Gdansk.” Walesa was later elected president, and now the Gdansk airport is named for him.

“The tables literally turned,” says Leary, who has covered stories in 35 countries and reported from or overseen coverage as an editor from all 50 states.

Rather than “parachuting in” to new locations and complex situations, Leary believes that reporters need to be armed with context and nuance—and that good reporting should “satisfy both experts and layman readers.”

That’s a tough assignment, but Leary says his liberal arts education helped him develop the historical background and analytical mindset needed to cover a wide range of topics.

His career has included seven years at the Baltimore Sun and 28 at the Philadelphia Inquirer, where he served not only as a foreign correspondent but also as national correspondent, editor of sports projects and investigations, editor of the commentary page and book review section, and night city editor.

The Pulitzer Prize-winning series that Leary’s team produced about school violence in Philadelphia led to “substantial change,” he says, “and that’s a heartening thing.”

Continuing to pursue the “life of kings,” Leary is now settling into his role at the helm of San Antonio Express-News, a paper with a daily circulation of 139,000 and Sunday circulation of 339,000. Thousands of Mexican nationals, he notes, are moving into San Antonio to seek better futures for their children, and some are also becoming new readers of the Express-News.

His goal in his new hometown, Leary says, is to promote public interest journalism that’s “essential to our entire readership.”