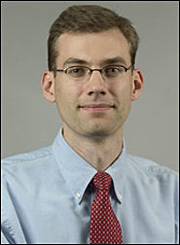 Thomas Stapleford, assistant professor in the Program of Liberal Studies at the University of Notre Dame, is among eight people who have been awarded fellowships as part of the American Academy of Arts and Sciences’ (AAAS) Visiting Scholars Program.

The fellowship program supports scholars and practitioners in the early stages of their careers who show potential of becoming leaders in the humanities, policy studies and social sciences.

During his year-long residency in Cambridge, Mass., Stapleford will work on a project titled “Home and Market: Women, Economics, and the Study of Consumption, 1910-1960,” which describes how female economists working in universities and government agencies pursued the first major empirical research on “household economics” and pressed their male colleagues to make the study of domestic life an important part of the discipline.

Stapleford studies the human sciences in the early 20th century, particularly economics and psychology. His first book, “Rationalizing American Liberalism: Statistics, Politics and the Cost of Living in America, 1880-2000,” is forthcoming from Cambridge University Press in 2009.

Stapleford’s dissertation won the Josepf Dorfman Award from the History of Economics Society in 2004, and his research has been supported by the National Science Foundation, Notre Dame’s Faculty Research Program, and Harvard’s Center for American Political Studies.

Since the Visiting Scholars Program was founded in 2002, 53 emerging academic leaders have participated and have gone on to secure teaching and research positions at Columbia, Harvard, Northwestern and Yale universities, among others, and have used their residency to complete more than 40 books and numerous articles.

Founded in 1780, the American Academy of Arts and Sciences is an independent policy research center that conducts multidisciplinary studies of complex and emerging problems. Current research focuses on science and global security, social policy, the humanities and culture, and education. Headquartered in Cambridge, the academy’s work is advanced by its 4,600 elected members, who are world leaders in the academic disciplines, the arts, business and public affairs.