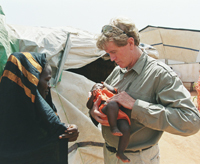 Dr. Bob Arnot has worked as an Olympic physician, served on the boards of Save the Children and the United Nations High Commissioner for Refugees, worked as the chief medical correspondent for NBC and CBS News, covered most major humanitarian disasters, served as MSNBC’s chief foreign correspondent in Iraq and Afghanistan, and written a dozen best-selling books on health and nutrition.

As host of the television show Dr. Danger, he navigates treacherous assignments in Somalia, Sudan, and other global hotspots. Arnot also spends four months a year on humanitarian projects in Africa and the Middle East, and just completed a PBS documentary on starving children.

His passions, he says, took root in Notre Dame’s College of Arts and Letters.

“The liberal arts degree was the best imaginable base,” Arnot says. “It has allowed me to integrate medicine into so many dimensions: broadcasting, publishing, human rights, and humanitarian aid.” 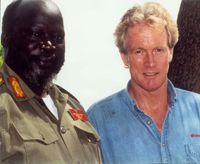 After he finished his bachelor’s degree in pre-professional studies in 1970, Arnot earned a bachelor’s of science degree at Dartmouth College and a medical degree at McGill University in Montreal.

After a few frenetic years as a resident at Dartmouth-affiliated hospitals, Arnot’s longtime interest in winter sports propelled him to establish the Lake Placid Sports Medical Center, which he led for four years, testing and training Olympic athletes.

While with the center, Arnot served as official physician to the 1980 Winter Olympics. When ABC News and Sports president Roone Arledge asked Arnot to appear on camera during the network’s Olympics coverage, Arnot’s career as a writer, producer, and commentator began.

And after more than 30 years, it’s still gathering momentum.

Curiosity and persistence, Arnot says, are the keys to opening unexpected doors, and he urges current Arts and Letters students to “do learn everything, because eventually you will use it all.”

In Arnot’s case, it was in part his language studies—including Arabic, French, Swahili, and German—that led him to opportunities to work as a war correspondent. His start was a spectacular year in Notre Dame’s Innsbruck program. 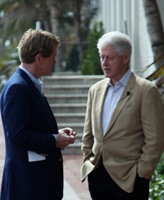 Dunne, Arnot says, taught him that “life is always about becoming.” He also helped him develop his personal motto that “you’re only as good as your next project.”

By that standard, Arnot is succeeding. In March 2013, HarperCollins Publishers will release his 12th book, The Aztec Diet, which examines the health benefits of power traditional foods which help fight the twin scourges of foods high in inflammation and glucose load.

In addition to his documentary, Arnot is also working on several medical projects. One employs feel good therapy as a treatment for depression, while a second looks for ways to deliver prescription pain medications through the skin without subjecting the body to addictive, debilitating opiates.

He is involved in service organizations, too, including Feed My Starving Children, Artists For Peace and Justice, the New York Film Academy, and the Eaglebrook School, a junior boarding and day school in Deerfield, Mass.

A Life of Fulfillment 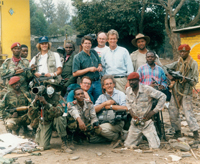 Dr. Bob Arnot in the Congo

Arnot’s personal and professional pursuits require a relentless travel schedule, he says, including a recent three-week swing to California and Vermont as well as China, Australia, Switzerland, Italy, Jordan, and Kenya.

But amid all the activity, Arnot recalls a recent quiet interlude at the family’s summer home on Nantucket, when spoke to his 18-year-old son, Hayden, about the benefits of a Notre Dame liberal arts education.

“I told my son that you want to work as hard as you can in school so you’ll have the skills and tenacity to excel. One day you’ll be glad you can work to accomplish the projects you love.

“And those skills,” Arnot told his son, “will be your platform for the most fulfilling—and the most fun—life you can have.”