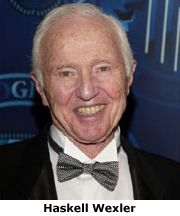 Academy Award-winning filmmaker Haskell Wexler will screen two films April 11 and 12 (Wednesday and Thursday) in the Browning Cinema of the University of Notre Dame’s DeBartolo Center for the Performing Arts.

Part of the FTT Talks Lecture Series, his appearance is co-sponsored by the Department of Film, Television and Theatre and the DeBartolo Center.

Wexler’s 2006 investigative work “Who Needs Sleep?” will show April 11 at 7p.m. The film documents exploitative working conditions in Hollywood and highlights the lack of sufficient protection for film workers. A presentation titled “Social Justice through Documentary Filmmaking” will be facilitated by Notre Dame FTT professor Jill Godmilow after the film. There is no charge for admission, but tickets are required.

“Medium Cool,” filmed in 1969 and one of Wexler’s most enduring works, will be featured April 12 at 7p.m. After the film, the director will discuss his lengthy career in both the Hollywood and independent film arenas in a presentation titled “Five Decades In and Out of Hollywood.” Admission to this event is $6 for the general public, $5 for faculty and staff, $4 for seniors and $3 for students.

The screenings and subsequent discussions are open to the public. Tickets are available by calling 574-631-2800 or on the Web at http://performingarts.nd.edu/ .

Noted for their socially conscious themes, Wexler’s ventures into directing have received critical acclaim. “Medium Cool,” for which he also wrote the screenplay, chronicles the affairs of a Chicago news cameraman during the 1968 Democratic convention. “Who Needs Sleep,” inspired by a colleague who died after falling asleepwhile driving home from work, showed to packed audiences at the 2006 Sundance Film Festival.

One of only six cinematographers to have a star on the Hollywood Walk of Fame, Wexler began working on feature films in the late 1950s. His cinematography credits include “In the Heat of the Night,” “American Graffiti,” “One Flew Over the Cuckoo’s Nest” and “Mulholland Falls.” Wexler twice won the Academy Award for Best Cinematography, in 1966 for “Who’s Afraid of Virginia Woolf” and in 1976 for “Bound for Glory.”

Other sponsors of the lectures are the College of Arts and Letters’ Institute for Scholarship in the Liberal Arts and Learning Beyond the Classroom Program, Department of Sociology, Higgins Labor Research Center, International Student Services and Activities, Mid America Filmmakers and Saint Mary’s College Film Studies Program.

Originally published by Kyle Chamberlin at newsinfo.nd.edu on April 04, 2007.