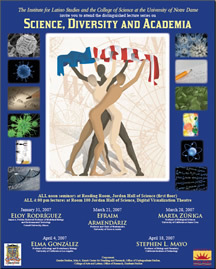 The need for biomedical research scientists to help battle the problem of diabetes among Latinos will be discussed Jan. 31 (Wednesday) in the opening talk of the “Science, Diversity and Academia” spring lecture series, sponsored by the Institute for Latino Studies and College of Science at the University of Notre Dame.

The University’s first lecture series to present distinguished scholars addressing current research and diversity topics, the event will feature two lectures by each speaker at the Jordan Hall of Science. A noon talk will be held in the first-floor reading room, and a 4p.m. lecture the same day will take place in the Digital Visualization Theatre, Room 100.

The lectures are as follows:

A tropical explorer and chemical ecologist, Rodrguez conducts field and laboratory research in Africa, India, the Amazon of South America, the Caribbean and Mexico, with a focus on chemical medicinals of tropical birds, ants, frogs and plants.

He introduced the concept of zoopharmacognosy, or the process by which wild animalsself-medicate, and also is involved in medicinal herbal chemistry of and for indigenous people worldwide.

Armendriz established and has received numerous awards for the Emerging Scholars Program, which helps enhance academic success in calculus of mathematics, science, and engineering students from traditionally under-represented groups. He is a member of the Board of Governors of the Mathematical Association of America and chair of the post-doctoral selection panels for the National Science Foundation and Ford Foundation.

The lecture series is cosponsored by Notre Dame’s Gender Studies Program, Kaneb Center for Teaching and Learning, Office of Undergraduate Studies, College of Arts and Letters, and the Office of Research/Graduate Studies.