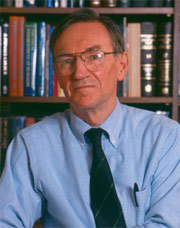 Donald Kommers, Joseph and Elizabeth Robbie Professor of Political Science and professor of law in the Notre Dame Law School, has received a Berlin Prize Fellowship from the American Academy in Berlin. An expert in comparative constitutional law, Kommers will spend a semester in Berlin next year to complete a research project on Germany’s constitutional culture.

The prize is a residential fellowship for advanced study in the arts, culture and public affairs. The academy bestows between 10 and 20 such awards each year world-wide. Kommers will do most of his work at Berlin’s Humboldt University.

A leading American authority on Germany’s political and constitutional system, Kommers was honored recently by Heidelberg’s Ruprecht-Karls-University “for advancing cooperation between American and German legal scholars and for the role his publications have played in bringing Germany’s constitutional jurisprudence to the attention of Anglo-American legal audiences.”

Originally published by Melanie McDonald at newsinfo.nd.edu on February 12, 2008.