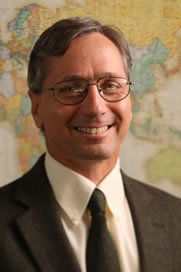 Gerard F. Powers, director of policy studies at the University of Notre Dame’s Kroc Institute for International Peace Studies, will be among the panelists at a United Nations discussion of international peacebuilding initiatives of the Catholic Church on Oct. 7 (Tuesday) in the headquarters building.

Co-sponsored by the the Permanent Observer Mission of the Holy See to the United Nations and the Catholic Peacebuilding Network (CPN), the event, “Peacebuilding: A Role for Religion,” will concern Catholic initiatives to promote reconciliation and peace around the world and particularly in the countries of the Great Lakes region of Africa.

According to Powers, who is CPN’s coordinator, “It’s well known that religion can be a source of conflict. Less well known is the role religion plays in promoting peace amidst some of the world’s most intractable conflicts. Together with the Holy See, CPN wants to enhance and make that role better known.”

CPN is a network of activists, academics, clergy and laity seeking to enhance the study and practice of Catholic peacebuilding. Led by the Kroc Institute and Catholic Relief Services (CRS) since its founding in 2004, it now includes numerous Catholic universities and church organizations among its affiliates.

The discussion will be moderated by Angola’s U.N. ambassador, Ismael Abrao Gaspar Martins. Other panelists include John Katunga, CRS senior advisor for peacebuilding in the East Africa region, and Maryann Cusimano Love, associate professor of international politics at the Catholic University of America.

More information on the U.N.’s Holy See Mission is available at www.holyseemission.org and on the Catholic Peacebuilding Network at www.cpn.nd.edu .

Originally published by Michael O. Garvey at newsinfo.nd.edu on September 23, 2008.