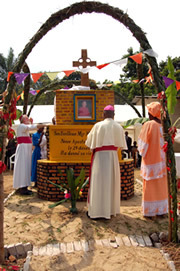 Nearly 100 Catholic Church leaders and specialists in peace and reconciliation convened in the Central African country of Burundi for the Third International Conference of the Catholic Peacebuilding Network (CPN) from July 24 to 28. Joining them were six faculty and staff members from the University of Notre Dame’s Joan B. Kroc Institute for International Peace Studies, a principal organizer of the event.

The conference examined the Church’s peacebuilding efforts in the Great Lakes region of Africa. Issues addressed included community-based reconciliation in Rwanda, trauma healing in Burundi, efforts to achieve political stability in the Democratic Republic of Congo, and the role of the Church in other countries in supporting these efforts.

Noting the importance of this conference, which focused on the war-torn countries of Burundi, Congo and Rwanda, Pope Benedict XVI emphasized, in a message to participants, that the Church in the region contributes to peace “by taking an active role in the resolution of tensions among communities and by fighting all forms of ethnic discrimination or corruption, in calling on all of the partners concerned at the political and economic levels to become positively engaged in the disinterested service of all and in the search for the common good.”

The conference was held at a critical time for the Church’s peace and reconciliation initiatives, according to Bishop Jean Ntagwarara of Bubanza, president of the Conference of Catholic Bishops of Burundi.

“The holding of this CPN Conference is a chance, or rather a grace, a gift from God for our sub-region, so often misdirected by repetitive and interminable wars,” he said. “We hope that it will permit the international community to become more familiar with our problems, the causes of our conflicts and the efforts undertaken by the Catholic Church in trying to contribute to peace.”

The conference was sponsored by the CPN, in collaboration with the Conference of Catholic Bishops of Burundi and Catholic Relief Services, and with support from the Kroc Institute and the German Catholic aid agency, Misereor. It was dedicated to the memory of Archbishop Michael Aidan Courtney, the Apostolic Nuncio in Burundi whose work for peace led to his murder in 2003. Conferees participated in the dedication of a memorial at the place where the archbishop was killed.

Scott Appleby, John M. Regan Jr. Director of the Kroc Institute and a co-founder of the CPN, noted that the conference is “an example of the need for the many peacebuilders from around the world to share `best practices’ and for scholars to engage with those who are doing the hard work of peacebuilding on the ground.”

The CPN is a voluntary network of practitioners, academics, clergy and laity that seeks to enhance the study and practice of peacebuilding, especially at the local level. It was founded by the Kroc Institute and Catholic Relief Services, with the active involvement of the Office of International Justice and Peace of the U.S. Conference of Catholic Bishops, Maryknoll, the Center for International Social Development at the Catholic University of America, the Sant’ Egidio Community in the United States, and Pax Christi International.

Originally published by Julie Titone at newsinfo.nd.edu on August 03, 2006.