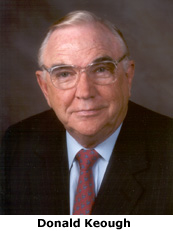 University of Notre Dame board chairman emeritus Donald Keough, his wife, Marilyn, and their children have made a gift to the University for an endowment in support of chaired faculty positions for scholars who are both world-class leaders in their field of expertise and demonstrate a commitment to the Catholic mission of Notre Dame.

To be called Keough-Hesburgh Professorships, in honor of Don Keough and Rev. Theodore M. Hesburgh, C.S.C., president emeritus of Notre Dame, the initiative will create two chaired faculty positions and fund the University’s efforts to identify and attract younger faculty and graduate students who would work with a Keough-Hesburgh professor.

“The generosity of Don Keough and his family has made an indelible difference in the great gains of Notre Dame in recent decades, and we are deeply grateful,” said Rev. John I. Jenkins, C.S.C., the University’s president. “We asked that the faculty chairs be named after Mr. Keough, a great lay leader at the University, and Father Hesburgh, a great Holy Cross priest president. These two individuals worked together on behalf of Notre Dame, and the name of these chairs expresses the fruitful collaboration between lay leaders and Holy Cross religious that has so enhanced the University.”

The goal of the Keough-Hesburgh Professorships is to attract outstanding faculty members to Notre Dame who may be early or late in their careers, visiting or tenured, and traditional academic scholars or individuals whose intellectual preeminence has been demonstrated in other settings.

Thomas G. Burish, Notre Dame’s provost, explained: “The two essential characteristics of those who will be appointed Keough-Hesburgh Professors are that they truly are among thebest in their area of expertise, bringing both uncommon talent and broad visibility to the University, and that they will enhance Notre Dame’s Catholic character and mission. It is our preference that such individuals be Catholic themselves, able to give witness to faith in their lives as well as provide intellectual leadership in Notre Dame’s Catholic mission to the University community.”

Part of the gift from the Keoughs has been used to create an office under the leadership of Rev. Robert Sullivan, associate professor of history and director of the Erasmus Institute, to identify Catholic scholars who are academically suitable candidates for positions at Notre Dame.

Keough is chairman of the board of Allen & Company Inc., a New York investment banking firm. He retired as president and chief operating officer of The Coca-Cola Company in 1993 and continues as a member of the Board of Directors. A member of the University’s Board of Trustees since 1978, he served as board chair from 1986 to 1991.

The Keoughs have made several other generous contributions to Notre Dame, including the Keough-Naughton Institute for Irish Studies, an endowed chair in Irish studies (held by the acclaimed author Seamus Deane), a summer internship program for Notre Dame students in Ireland, Malloy Hall (which houses the Departments of Theology and Philosophy), and a men’s residence hall named in Marilyn Keough’s honor. The Keoughs have designated a portion of their gift to endow a fund to be used to maintain and enhance the chapel in Marilyn Keough Hall.

Originally published by Dennis Brown at newsinfo.nd.edu on September 27, 2006.