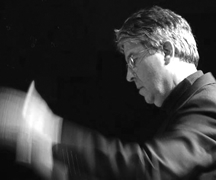 They perform medieval music, and they’re so popular they’ve had to add performances.

Schola Musicorum, a vocal ensemble that performs Gregorian chant from original medieval manuscripts, was founded by Notre Dame music professor Alexander Blachly when he joined the faculty in 1993. A biannual performance, Abend-Musique XXVI, will take place Wednesday, March 8 in the Reyes Organ and Choral Hall in the Marie P. DeBartolo Center for the Performing Arts. Two sessions are scheduled, at 8:30 and 9:30p.m.

Abend-Musique (“Evening Music”), Blachly notes, is a term 17-century composer Dieterich Buxtehude used to refer to his late-afternoon Sunday concerts. Blachly has numbered the concerts since they began; this will be the group’s twenty-sixth.

The last concert in the 100-seat Reyes facility sold out, and people had to be turned away, so back-to-back performances are planned.

The concerts are brief—only 20 minutes to a half-hour in length. “As beautiful a thing as it is,” Blachly says, chant doesn’t vary much in sound and texture, and doesn’t lend itself to a lengthy performance.

Schola, Blachly notes, is the medieval term for a chant choir. “Musicorum means ‘of musicians,’” he says. The distinction is important. Schola cantorum would indicate a group of singers. Schola musicorum is a more appropriate term for a group of people devoted to the study of music.

“There’s a scholarly component to this group and always has been,” he says.

The core of the group is faculty members and graduate students, although undergrads will participate in one or two pieces in the concerts. In addition to Blachly, principal singers are Paul Appleby, Michael Driscoll and Glee Club director Daniel Stowe.

Normally, the ensemble sings from transcriptions, although sometimes they sing from photocopies of the original manuscripts. It’s both a process of studying and becoming familiar with the body of work, and of performing it publicly, Blachly notes.

“Public performance is important for two reasons,” he says. “It brings chant to the public and the Notre Dame community, and it forces us to bring the chant up to the performance level, not just study it in the classroom.”

This semester Blachly combines both performance and classroom—he’s also teaching a course in Gregorian chant.

“We study all the different places within the Catholic rite where Gregorian chant is sung,” he says. He’s created a Web site with facsimiles of medieval manuscripts, so students can view them directly. Then they make transcriptions and sing the chant in class.

There is a huge repertory of medieval music that goes unsung today, Blachly notes. “It was practically the sole music in Christian worship for over a thousand years,” he says. “It’s a great loss, I think. Up until Vatican II, it was still a living part of the ritual. But it’s finding it’s way back into services. People who knew it growing up miss it, and are happy to see it coming back.”

Besides his work at Notre Dame, Blachly lives in New York City and directs Pomerium, an ensemble that performs the sacred music of the Renaissance. Three out of four weekends Blachly travels to New York to work with them. “I have kind of a dual existence,” he says. “Sometimes the travel gets to be a bit much, but it’s a great existence. I have access to what’s going on in New York, and I almost always go to a concert or play.”

Although with the addition of the performing arts center to campus, he says, “It’s amazing how many fantastic performers I’ve heard here in the last year. Probably more than in New York.”

Pomerium also is scheduled to perform, at 7:30p.m. Tuesday, March 21, in the performing arts center’s Leighton Concert Hall. Ticket information for both groups is available online at http://performingarts.nd.edu or by calling the box office at 631-2800.

Originally published by Carol C. Bradley at newsinfo.nd.edu on March 02, 2006.