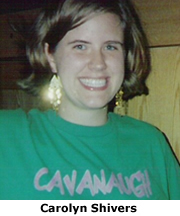 The celebrated days of summer camp – swimming, hiking, arts and crafts, and campfires – run through the memories of our youth. But often times, we might take these simple summer activities for granted. Many children with disabilities have never had the opportunity to partake in these bouts of fun.

“It was sad to see some of the older campers, see how happy they were, and to wonder what they had to go through when they were younger when they didn’t have these opportunities,” said Carolyn Shivers, a junior psychology major and music minor at Notre Dame, who worked at Camp Friendship this summer as a camp counselor to hundreds of children and adults with developmental disabilities.

Founded in 1964, Camp Friendship is one of three camps run by Friendship Ventures, a non-profit organization based in central Minnesota, offering summer residential camp programs to children and adults with mental and physical disabilities. The campers range between the ages of 5 and 90 and are supervised by camp counselors and program staff.

“Counselors and program staff are mostly college kids, a lot with little or no experience working with people with disabilities,” Shivers said. “We had a weeklong orientation crammed with everything from crisis intervention to vulnerable adult laws.”

Each week, Shivers was assigned to a cabin with anywhere from two to 12 campers, depending on their individual needs.

“The ratio of counselors to campers was never higher than one-to-four,” she said. “Our campers ranged from high-functioning individuals who were verbal and able to take care of all of their own personal needs, to one-to-one people who needed constant supervision, behavioral management and total personal care.”

Counselors were not only responsible for supervising campers within the cabins, they also accompanied them and participated in their activities. Each session had specially tailored programs for campers, ranging from cooking to dancing to outdoor sports, and even motorcycles.

“The campers get a week that’s a break from monotony. They get a chance to drive boats, go swimming, climb rock walls and generally hang out in an environment that’s completely different than the one that they spend almost all of their time in, be it a group home, an institution, or their own home,” Shivers said.

“The counselors are sort of the concierges of their vacation. They give company, take them to activities, and give them things to do between activities. They really do become friends,” she said.

Shivers recalled a specific instance with a 52-year old non-verbal Down’s syndrome man who is considered a camp legend.

“The first week I was in his cabin, he was kind of sullen, not really showing much emotion, hardly ever going to activities,” she said. “The second week he came to camp, I was in a cabin with him again, and for some reason on Wednesday, he was in a really good mood. I was walking back with him from dinner, and he stuck his tongue out at me, so I stuck my tongue out at him. This escalated until he just spit all over me, and then he laughed. Making this man laugh was the greatest feeling ever.”

Shivers not only took away a feeling of accomplishment by impacting the lives of her disabled campers this summer, she also received a scholarship from Friendship Ventures in recognition of her outstanding dedication to the mission of the organization.

Shivers plans to obtain her doctorate in child psychology, specializing in music therapy for children with developmental disabilities.

“This summer definitely reaffirmed what I want to do,” she said. “These people have so much to offer, if only people would take to time to communicate. For children who have difficulty learning or verbalizing like their peers, music can make these tasks easier. The rhythm, the melody, these things can make more sense in a child’s mind than everyday talking.”

“At the basic level, it’s like singing to infants to get them to fall asleep. Music just has a different way of reaching people. So basically, I would like to use music as a way to teach children or as a way of behavior management when children become upset at their lack of ability to get others to understand them.”

Coming to Camp Friendship with little experience in the realm of helping the disabled, Shivers left invigorated to open avenues for interaction with disabled children and adults.

“I would really encourage everyone to look into ways that they can help or get to know more about foundations that serve people with developmental disabilities,” Shivers said. “They’re a relatively underrepresented part of our population, and they are such amazing people who are capable of teaching and loving so much.”

Originally published by Arlette Saenz at newsinfo.nd.edu on November 27, 2006.